How many emails can you really send with GMass and Gmail? [2021]

In working with over 700,000 accounts in our lifetime, we’ve noticed that Google often throttles the number of emails a particular account can send based on a variety of factors, including:

We don’t have exact rules on how Google decides how many emails an account can send at a particular time, but here’s what we’ve observed:

Campaign Data From the Last 24 Hours

Have a look at some live campaign stats from the last 24 hours. This data is updated daily.

6 ways we break your limits

A brief history of how we’ve overcome Gmail’s limits

For a long time, the biggest frustration amongst GMass users was hitting Gmail’s sending limits and receiving a flurry of “You have reached a limit for sending mail” bounce messages in the Inbox. To address this, we built the distributed scheduling feature, where you can send large campaigns of 10,000 recipients or more, and GMass will spread it evenly over a number of days, so as to not exceed your daily sending quota.

This technique proved to have its limitations, however, because Gmail doesn’t always allow you to send your full account limits.

To further address this, GMass added the option of being able to set an outside SMTP server with your account, such that you could still use GMass and Gmail to launch your email campaigns, but the emails would actually be sent via a third party sending service rather than by Gmail directly. From the user’s standpoint, however, everything would still look and feel the same: the emails would still show up in your Sent Mail folder, and everything from opens and clicks to bounces and replies would still be tracked.

For our non tech-savvy users, however, signing up for a third party SMTP service and connecting it to GMass was frustrating and difficult. To address that frustration, we made it possible for users to use our internal SendGrid account. We created an application process for “good” senders where we would connect their GMass account for them to our internal SendGrid account, so the user could skip the technical details and just send.

Still though, this requires “work” on behalf of the user, because the user has to

To kick off 2021, we’ve built six ways to help you overcome sending limits.

There are six ways we can help you get around the gmail.com limits of 500/day and the G Suite limits of 2,000/day.

Configure your settings for Gmail limits

In the Dashboard, you’ll find a section of the Settings called “Gmail Limits”. 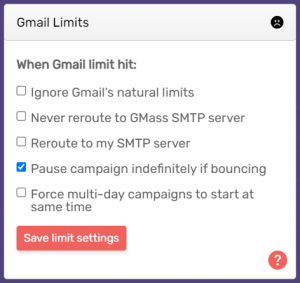 Ignore Gmail limit: When enabled, GMass won’t stop your campaign at 500 emails/day (@gmail.com accounts) or 2,000 emails/day (Google Workspace accounts). If you haven’t specified a set number of emails to send per day in your campaign-level settings, meaning you want the maximum sent, GMass will keep sending natively through Gmail, unless it encounters “You have reached a limit” bounce at which point it will stop. Note that this is an account-level setting and applies to all campaigns. You can also leave this unchecked and decide to ignore Gmail limits only on certain campaigns.

Never reroute to the GMass SMTP server: When enabled, GMass will never reroute your campaign to our internal SMTP server (SendGrid) even if you bump up against your sending limits and you qualify to use our SMTP server. Instead we’ll simply push your campaign out 24 hours into the future when your account limits reset.

Reroute to my SMTP server: This setting only applies if you’ve connected an SMTP server to your GMass account. When enabled, if you send a campaign natively through Gmail instead of your SMTP server, and then you hit a sending limit, the remaining emails will be sent over your own SMTP server. A “sending limit” is defined as either a) starting to receive “You have reached a limit” bounces from Gmail or b) sending what your account naturally allows (500/day for Gmail or 2,000/day for Google Workspace). Note that this is an account-level setting and applies to all campaigns. You can also leave this unchecked and decide to reroute only certain campaigns to your SMTP server.

Pause campaign indefinitely if bouncing: If your campaign starts bouncing with over-limit bounces from Gmail, this setting will force the campaign to pause and stay paused until you manually resume it. This setting will prevent GMass from trying to send it again a few hours later.

Force multi-day campaigns to start at same time: Normally, campaigns that run into sending limits would be staggered so that a full 24 hour of space is provided between sends, in order to reset the sending quota. But if the goal is to send batches of emails at the same start time very day, this setting will override the default behavior. For more details, see the article on timing.

FAQ on rerouting emails to our SMTP server

What’s the secret formula to getting pushed through SendGrid?

We have a sophisticated and accurate way of determining whether a campaign is opt-in and should be rerouted through SendGrid.

What about the deliverability advantage of Gmail?

When GMass automatically pushes a campaign via SendGrid rather than Gmail, the email is no longer going through Gmail’s high deliverability servers, but our recent data shows that the IP of the sending server is less relevant than it used to be for email deliverability purposes.

Inbox placement has more to do with the actual sender, the domain’s reputation, and the content of the email, rather than the sending IP. Meaning, we’ve been noticing that if half of a 5,000 recipient campaign sends through Gmail, and the other half sends through SendGrid, the open rates for each batch of 2,500 are around the same.

However, to ensure that we’re not compromising your campaign’s deliverability by re-routing it through SendGrid, we’ll show you your campaign’s open rates, broken out into TWO groups — the chunk of emails sent natively via Gmail, and the the batch sent via SendGrid.

Here’s an example of what you’ll see in a campaign report:

I don’t want my email campaigns automatically pushed to SendGrid. How do I stop it?

You can set this in your Settings, and we’ll set your account to never use this new capability.

What happens when you try to send but you are over limit?

Using GMass, you’ll notice that Gmail will start bouncing the emails and the bounce notification will look like this:

If you are in the Gmail interface, and you try to send a regular email with the regular blue Send button, you’ll be stopped with a popup that looks like this:

What does GMass do when it detects that your account is over limit?

GMass looks for bounce notifications like the one shown above to determine if your account is over limit. In fact, while it’s sending your campaign, it’s also simultaneously monitoring for these bounces. If the bounces start to appear, and you are technically under the 500 or 2,000 limit, and your campaign isn’t being rerouted over an SMTP service, then GMass pauses your campaign for a few hours and tries to continue sending later. Learn more about timing.

Does GMass resend the emails that bounce due to limits?

Yes, GMass automatically resend the emails that have bounced with an over-limit message. In case this doesn’t work though, you can easily resend these emails after you determine that your account has more sending ability.

If you have a G Suite account, and you’ve reached your limit and are unable to send emails, you have the option of having your G Suite administrator “reset” your account. This is done through the G Suite Admin console. By resetting your account, your daily quota is immediately reset. This option, however, can only be used 5 times per year per account, so use this sparingly…only in situations where you’ve hit your limit and you absolutely need to send more email, whether it’s through GMass or person-to-person email with the regular Send button.

Does subscribing to GMass improve my ability to send?

Subscribing to GMass allows you to send more than 50 emails/day with GMass, but it doesn’t have any impact on your account’s reputation with Google and your sending limits with Google. It only has bearing on what you can do with GMass. If Google allows your G Suite account the full 2,000 emails/day, but you’re using a free GMass account, then you’re still limited to sending 50 emails/day with GMass. You could still, however, send 2,000 individual emails with the regular Gmail Send button though. Whether you have a free or a paid GMass account, your overall sending limit per day is the same and is determined by Gmail, not by GMass.

How many emails can I natively send with GMass and Gmail?

If you have a Gmail account with an excellent reputation, you’ll usually get your 500 email limit for the first 24 hours but only a subset of that for the second 24-hour period. Meaning, if you send 750 emails, where GMass sends the first batch of 450 now (so you have a buffer of 50), and the remaining 300 24 hours later, that usually works. Avoid sending 900 though, because then you would need your full sending ability during the second 24-hour period.

If you have a G Suite account with an excellent reputation, you’ll usually get the full 2,000 email limit for the first 24 hours but only a subset of that for the second 24-hour period. So, you can probably send 3,500 emails, where 1,950 go out the first day, and the remaining go out on the second day, but if you were to send 4,000 emails, you might get some bounces on the second day.

We offer you the capability to “break” Gmail’s sending limits and send an unlimited number of emails through your Gmail account. It works by connecting your account to a third-party SMTP service like SendGrid. You still launch your email outreach campaigns from Gmail, just like normal, but your emails bypass Google’s servers and are sent via the third-party SMTP service instead. See the “six different ways” section above to learn how to circumvent limits.