The results of our Product Hunt promoted posts

In early 2019, I signed up for a six-month “promoted product post” campaign with Product Hunt. GMass has been featured on the site organically several times in the past, and the Product Hunt community has always liked GMass, so I thought a paid promoted campaign could boost our user base and increase awareness. The deal was this: a six-month-long promotion, where GMass would be featured as the promoted product of the day once a week, every week, for those six months, totaling 24 total days of promotion.

How much did the Product Hunt promotion cost?

Working with a Product Hunt advertising specialist, we agreed to the following terms:

When your product is the promoted post for the day, you show up in the fixed fourth position all day long. The “Promoted” designation appears next to the product so that Product Hunters clearly know that your product is there as a paid promotion. Clicking on the product takes you straight to our website, rather than to the Product Hunt page for our product, which is a significant difference from the organic product posts for the day. Clicking on “Comments,” however, does take the user to our PH product page.

Notice that relative to the products above and beneath, GMass has an extraordinarily high number of upvotes. This is because our product, even as a promoted post, continues to gather upvotes from the community, even though that doesn’t change the position of our promoted product in the daily listings. Promoted products are always fixed in the fourth position. 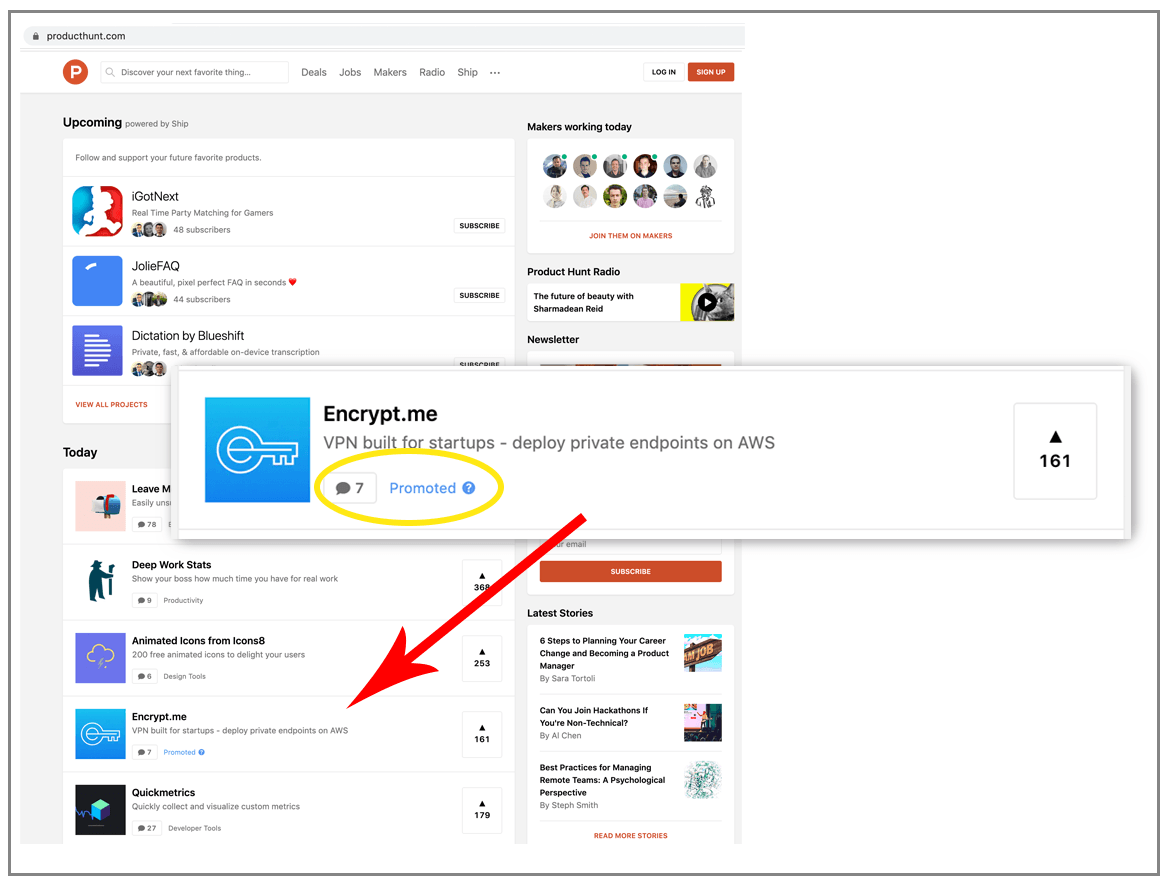 (Of the 24 times GMass was the promoted product, I never took a screenshot of the website, but here’s a screenshot of ANOTHER product being featured — notice how it’s in the fixed fourth position.)

Additionally, on the days that GMass was the promoted product, it was also featured as such in the PH daily email newsletter. It looked like this in the email newsletter: 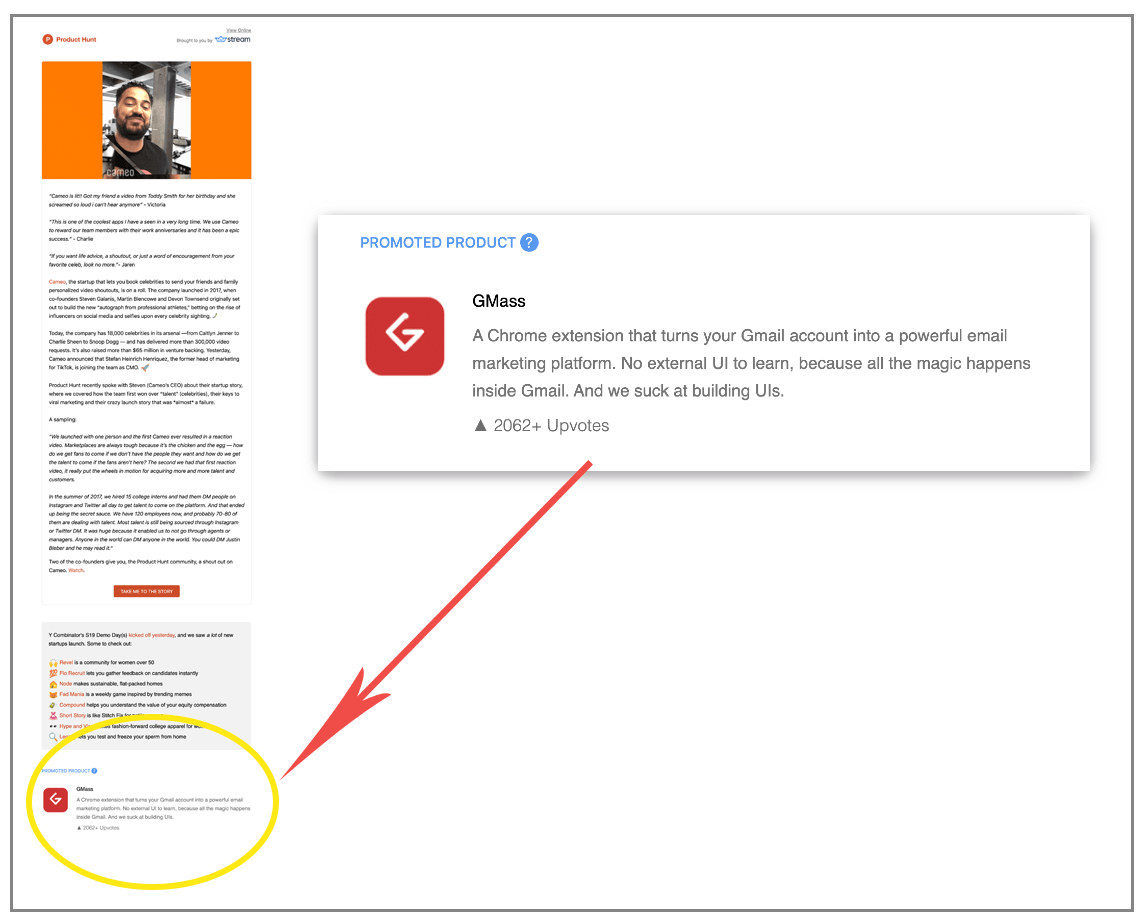 (Note that it’s pretty far below the fold. I had to enable some special settings in my screen capture software just to get one giant capture of the newsletter from the top to where the promoted product is mentioned.)

How much traffic does the Product Hunt homepage get?

According to my advertising rep, the PH homepage averages about one million unique pageviews/month, which equates to about 30,000 pageviews/day. Additionally, the email newsletter is sent to 300,000-400,000 people daily.

What were the results?

You might think that the traffic can be separated by referrer, though, to gauge what traffic came from the website vs. the newsletter, since the newsletter would show up as direct traffic. However, many community-oriented sites, including PH, practice referrer masking, which prevents the web server from detecting the HTTP referrer on the request. They do this by inserting an interstitial page between the PH page and the target website, and this “middle man” page is responsible for redirecting the browser to the target website. It also eliminates the HTTP referrer on the page request.

That makes it impossible for an analytics tool to separate the Product Hunt homepage traffic from its newsletter traffic. 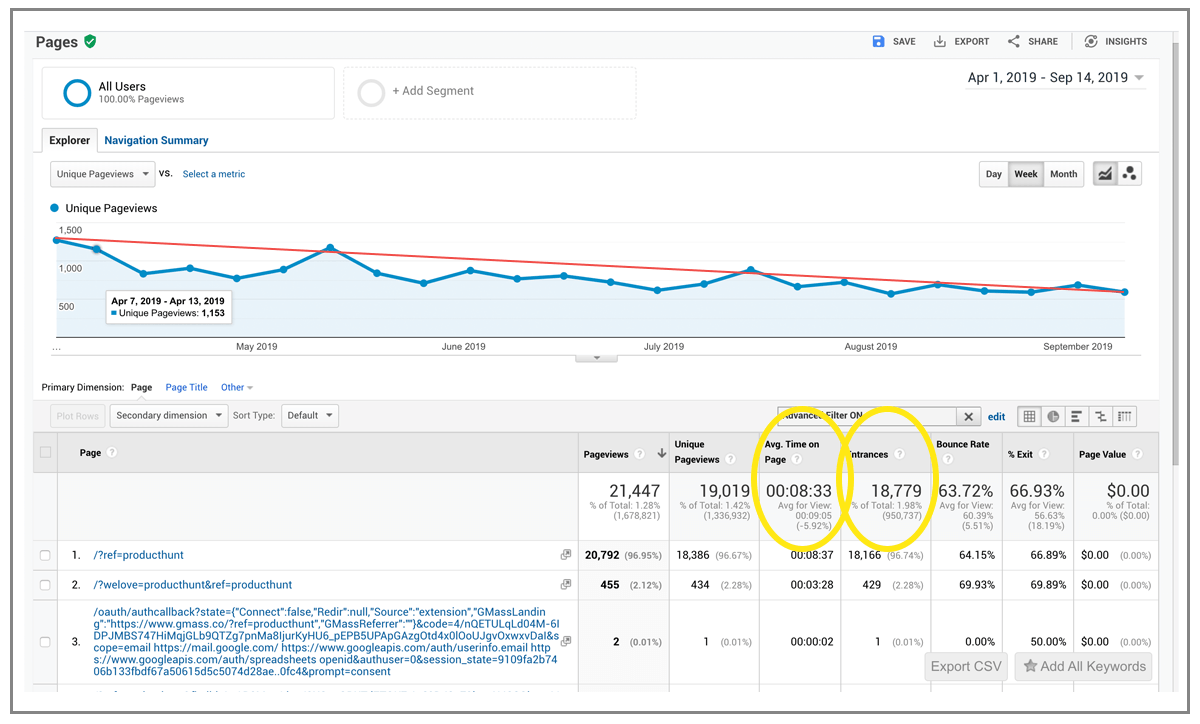 The key takeaways from Google Analytics are:

So what caused the steady decline in unique visitors throughout the six months? I’m not sure, but it could be that PH users experienced GMass fatigue, and were tired of seeing GMass on the homepage week after week. I suspect that many PH users are daily visitors, so it’s not like GMass was being exposed to a brand new set of people week after week. I postulate that most of the people who saw it every subsequent week had seen it previously. Another theory is that traffic to PH is slower in the summer months than the non-summer months. My promotion started in April and concluded toward the end of the summer.

PH did share some traffic stats with me about their homepage traffic. It seems that homepage views range between 20K and 35K pageviews per day. There was no consistent decline of PH homepage views going into the summer months, at least based on the data provided by PH to me.

It’s also worth noting that the overall clicks and unique visitors as a result of the promoted posts differed between my Google Analytics and PH’s internal system. The stats that my advertising manager shared with me always showed more clicks and more pageviews than my Google Analytics data showed. Despite some effort between us, we were never able to decipher the reason for this discrepancy.

What about the conversion rate?

Throughout the six months, a total of 498 user accounts were created by clicking through the promoted post link.

Of these 498 user accounts, 41 upgraded to a paid subscription. The average subscription price of a GMass account is $16/month, so doing 41 x $16/month yields $656/month recurring revenue gain from this promotion. Another way to look at it is we spent about $1,500 per new paid subscriber. The average lifespan of a paying GMass customer is about one year, so doing $16/month x 12 months = $192, which is far short of the $1,500 customer acquisition cost.

So was it worth it financially in terms of customer acquisition cost (CAC)? Probably not.

But was it worth it in terms of the exposure and increased brand recognition of GMass? Perhaps. I noticed that during the course of the six months, whenever another email automation product was hunted organically, in the Comments, someone would ask, “Well, how is this better than GMass?” That awareness — to compare anything new to GMass — might not have existed if not for the continuous weekly exposure GMass received.

So would I do another paid promotion with Product Hunt? I’d consider it in the future after a new Product Hunt audience has cycled in, and if I can get better pricing from their advertising team.