Ari Meisel—a self-described “overwhelmologist”—is the author of “The Art of Less Doing” and “The Replaceable Founder.” He helps entrepreneurs optimize, automate, and outsource tasks. In the interview, Ari shares his secret for making your inbox a place of excitement rather than dread. 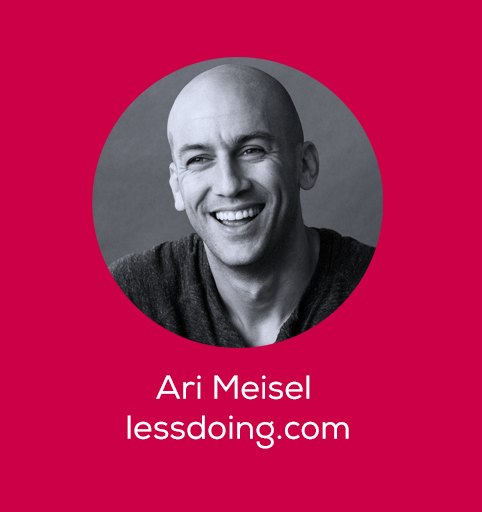 How do you personally manage your inbox?

I use Voxer and Slack to communicate with my team. I also use Voxer to communicate with my clients. We do a bunch of sales stuff over Facebook Messenger. We use Intercom to bridge the gap between internal and external. All of that means that a lot less things go to my inbox to begin with. My inbox is a place of zen. The things that are there are usually opportunities, things that I want to deal with. So I probably check my email a couple dozen times a day.

I automatically filter all emails with the word “unsubscribe” into what I have labeled as an optional folder. I want the inbox to be a place for essential things, rather than having to switch back and forth between various kinds of messages.

I check the optional folder maybe once a week. It’s a lot of newsletters—things that maybe I want to read, maybe I don’t—but they don’t get in the way of the stuff that I really need to get done.

How do email tools fit into your approach?

People tend to think that tools are going to fix things for them, and they don’t. I can’t tell you how many times we deal with somebody who has thousands of unread emails in their inbox and they say, “Oh, I’m just going to install SaneBox. Everything’s going to be fine.” That’s putting a Band-Aid on the problem. If you have a good system and processes in place, then tools absolutely can help. Technology simply magnifies habits. That’s all it does.

I use Chrome, and I have the Trello extension for Gmail. A big part of what comes into my email is something that I want my team to deal with, or I want to deal with later. So I make it into a Trello card really quickly, which is key for me. The DocuSign extension is another one. If somebody sends me a PDF that I need to sign, then I can do it right there in Gmail without having to switch to another tool.

Formerly, I would have used a tool like FollowUpThen, but now I can use the built-in snooze functionality in Gmail. Calendly is my scheduling tool, and it has a really great Gmail addon that lets you drop in times that people can click and book calls with you. That’s really helpful for scheduling.

You made an interesting observation that no one is trained to manage their inbox. You’re given an email address, and just told, “Go.” If we were given a basic training in inbox management, what would it look like?

What I teach is something we call the three Ds, which is basically that you only handle emails once. You never say, “I’m going to come back to this later.” You have three choices: you can delete it, you can deal with it now, or you can defer it.

If you’re going to delete it, that’s pretty simple. The second option is to deal with it. If you can deal with it right now, like in the next three minutes, do it. We trick ourselves into thinking that there’s going to magically be this period later in the day where we’re not going to be busy with something else. And that’s just going to add up. Now, you can deal with it by delegating. That’s a subset of dealing with it, because if you’re delegating effectively, you really are done until someone comes back to you with completion or a question.

The third option is to defer it, which is where the snooze functionality comes in. We’re not procrastinating. We’re making an active decision to say, I’m being asked to do a particular kind of thing—whether it’s writing something or an interview, whatever it might be—and I know that I do that kind of thing better at this time, in this place. There are people who do “finance Fridays,” for example. So any email you get throughout the week that has to do with finances, you defer it to Friday and deal with it then.

What does it take to create an inbox that inspires excitement rather than dread?

You need to use different tools for different kinds of communication. A lot of things shouldn’t make it to your inbox to begin with. The inbox should really be for communication with completely outside parties that are either prospects for you, or you’re a prospect of theirs. For example, I meet somebody at an event and we exchange some emails. They want to find out about my services, and I might be able to work with them. That’s using email to communicate with a prospect. Or, contacting somebody that I want to work with on a higher level or that I admire, or group that I want to join. What’s not exciting about that? It’s new opportunity after new opportunity. Then you get to really use it in the way it’s intended, which is as outreach to people that you’ve probably not worked with before.

Email is essentially a transactional communication tool. It’s very back and forth. Very ping pong-y. 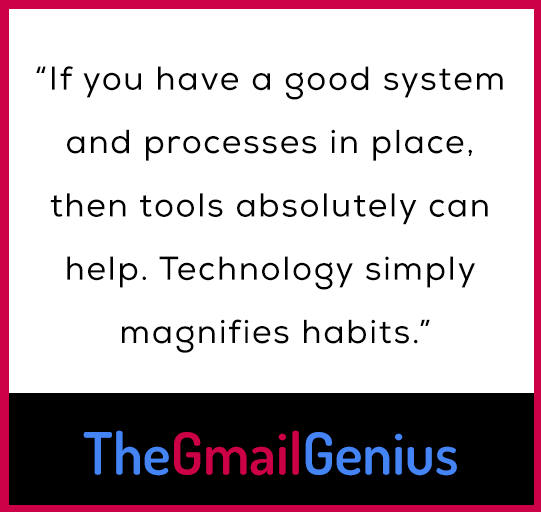 You’re not a fan of completely outsourcing inbox responsibilities.

I never want somebody else managing another person’s inbox, for two reasons. First, there’s a trust factor that is always going to be broken. If somebody emails and they know that they’re talking to your assistant in your inbox, that will change the type of information they share with you. And if you don’t tell them that it’s your assistant, that’s just weird.

The other downside is that you’re adding another step to the process. If somebody else manages your inbox and for 15 minutes a day they go through it with you and tell you what you need to deal with—you’re just causing delays and adding work. It’s like you’re infantilizing yourself.

There’s nothing wrong with saying, “Hey, I don’t do email, but you can email my assistant.” Set the expectation upfront.

What are your email pet peeves?

The main one is people not responding. Nowadays, there is absolutely no excuse for not responding in some form to an email that you get. It could be an auto-response—that’s totally fine—but some sort of response. I can’t tell you the number of times that I’ve dealt with somebody who wasn’t even that famous, and they just don’t respond to emails. And I think that is just so unacceptable in this world. Adam Grant puts it really well: you wouldn’t walk down the hall and not say hello to somebody who said hello to you because you’re being greeted too many times. Either use the tool well, or don’t use it at all.