JR Raphael is the writer and productivity master behind the weekly Android Intelligence newsletter, which started out as a column for Computerworld back in 2010. He frequently covers Google and related topics for Fast Company. Through email (naturally!), JR shared his best Gmail tips and extolled the convenience of custom notifications. 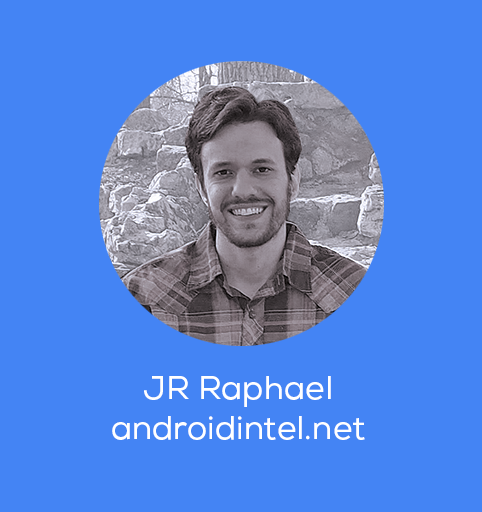 Walk us through your daily email routine.

But of course! See, when I wake up in the morning and the alarm gives out a warning, I don’t think I’ll ever make it on time. By the time I grab my books and I give myself a look, I’m at the corner just in time to see the bus fly by…

As for email routines, my ideal strategy is to limit my email management to a few concentrated windows of time each day. If I always leave my inbox open on my computer, I get in the habit of flipping back and forth to glance at it every few minutes—for no apparent reason, other than a tick-like habit—and that sort of constant interruption isn’t exactly great for my focus. It’s really not an efficient way for me to keep up with email, either. And the truth is, important as I like to think I am, I receive very few emails that genuinely demand immediate attention (and I have custom Gmail notifications set up for the small amount of stuff that I do consider to be high-priority).

What generally works best for me, then, is to open my inbox only when I need it—usually for a triage an hour or two into the morning, another sometime after lunch, one more somewhere in the late afternoon, and one final check-in before I call it a day and seek out a noodle-based supper. My goal each time—whenever I look at my inbox, really—is to process everything that’s there. That’s doesn’t necessarily mean I answer every email right away, mind you, but I try to do one of three things within a few seconds of seeing any message:

1. Archive it — if the message doesn’t require any response or action.
2. Respond to it — especially if I can do so in a minute or less. (And then archive it.)
3. Snooze it — if it demands a level of thought or response I can’t get to right away. I might snooze it for later that day, later that week, or a month down the road, depending on when I think I’ll be in a good position to deal with it. The idea, though, is to get the message out of my hair so it doesn’t create clutter and make my inbox unmanageable—and then to have it reappear and grab my attention when the time is right.

My golden rule is to never open an email twice and never leave an item in my inbox beyond a single day. I’m by no means perfect about that, but it’s what I strive to achieve.

Are there any tools or extensions that you simply can’t live without?

Funny you should ask. When I first started thinking about this, my answer was going to be Inbox—Google’s “experimental” alternative email app. But then, well, y’know. Sigh.

With Inbox now set to join so many other Google services in the great digital beyond, I’ve been working through some creative ways to recreate its features within the regular Gmail environment. I put together a meaty list of suggestions over at Fast Company, but one standout element is a nifty replacement for Inbox’s link saving feature.

It’s called Email This, and it’s a super-useful little inbox enhancement. Like Inbox’s already-deprecated equivalent, it lets you click a single button (or use a keyboard shortcut) to save any web page from your browser directly into your inbox. Whereas Inbox would save just a link, though, this tool actually saves the entire article—with ads and other extraneous elements stripped out, even—so you can read the whole thing right then and there, without having to ever click away. It’s kind of like Pocket, only it lives entirely in your inbox instead of requiring you to look in a separate app (or forget to look in a separate app, as is more often the case for me).

The service works from mobile devices, too, though it’s a bit more complicated on that end. But once you get used to it, it’s really not so bad.

You know your stuff when it comes to Gmail settings. Complete the sentence: the most underused Gmail setting is…

Ooh, that’s a tough one. I’m gonna go out on a limb and answer with something that isn’t technically a Gmail setting but does affect my favorite new Gmail feature: snoozing.

When you snooze a message in Gmail, Google will offer to return the message to your inbox at a handful of default times—”Later today,” “Tomorrow,” “Next week,” and so on. You wouldn’t know it by looking anywhere in Gmail itself, but you can actually customize the specific time of day each option uses.

Here’s the trick: Open up Google Keep and click the “Settings” option in its left-hand menu. See the section labeled “Customize your reminder defaults,” with choices for morning, afternoon, and evening? Change those times to whatever times you prefer. If you want messages you snooze for “Tomorrow” to show up at 10 a.m., for instance, set that as your morning time. If you want emails snoozed for “Later today” to show up at 5 p.m., 6 p.m., or 11:47 p.m., set your evening time accordingly.

Once you hit save, you’ll see Gmail start to use those new times within its default snooze suggestions.

Gmail’s redesign earlier this year was widely covered and critiqued. What’s your take on the changes?

You know, I’m kinda of two minds on this now. On the one hand, I think Google did a decent job of updating Gmail in a way that made it more modern and functional without making users feel like they were moving into a whole new service. With something as personal as email—and as widely used as Gmail—making any sort of drastic change would have been a major risk, especially when it comes to the service’s not-so-tech-savvy users.

And Google really did bring in some valuable new elements. The new native offline mode, for instance, is a huge improvement over Gmail’s awkward and clunky (and extension-requiring) old offline setup. And introducing the ability to snooze messages is a massive upgrade and productivity booster. I’ve really come to rely on snoozing from my years with Inbox, so seeing that make its way into Gmail is fantastic.

At the same time, now that we know Inbox is going away, I’m really disappointed that so many of its innovative ideas haven’t been integrated into Gmail. For me, the biggest letdown is probably the loss of Inbox’s reminders system. Gmail’s new Tasks system has a fraction of the functionality, and it’s a shame to see Google give up on something so promising for something so blah.

You curate the excellent Android Intelligence newsletter and you’ve written about the promise of email newsletters as a media platform. What are the integral elements of a great email newsletter?

Well, first and foremost, you’ve gotta watch out for anything written by a fella with a name like “JR.” Anyone who goes by initials is bound to be a shifty (if also incredibly handsome) sort.

That aside, though, I think what makes a newsletter great is its ability to connect with readers and offer them something of value—something they weren’t already getting through more traditional reading venues (social media, the web, scribblings on public bathroom stalls, etc). It’s really a fascinating medium, because in an era where most of us are inundated with a nonstop stream of information, a newsletter is a finite, self-contained entity that comes directly to us and gives us info we want from a source we know and trust. It’s like a super-personal and interactive digital magazine that’s delivered right inside our virtual doors. There’s nothing else quite like that.

In terms of specifics, I’d say the keys to excellence are somewhat different in every instance. Some newsletters are written by an individual person—with that one voice always present and recognizable—and they feel almost like a conversation as a result. That’s the sort of vibe my newsletter aims to achieve, mostly just because I like the sound of my own voice and am always looking for new places to make questionable puns. The Interface, a newsletter about social networks written by Casey Newton, is another good single-voice example, as is Cord Cutter Weekly, a newsletter about (you guessed it) cord-cutting written by my pal Jared Newman.

Other newsletters—like, good golly, this one!—are less centered on one individual and more about a consistent style and quality of information. Same goes for Quartz Obsession, one of my favorite email newsletters to read and one that’s about a wildly different topic every day.

Ultimately, it all boils down to the content, the value, and the enjoyment a newsletter is bringing to the reader. If you know what you’re about and find a way to consistently deliver on it, people will tolerate your dated 90s sitcom jokes and keep inviting you back into their inboxes for more good times and bad puns.