Josiah Goff is the CEO of Inigo Digital, which specializes in creating online platforms for leaders. Josiah recently started outsourcing the management of his inbox and graciously gave us a behind-the-scenes look at how he’s working with an assistant to spend less time on email. 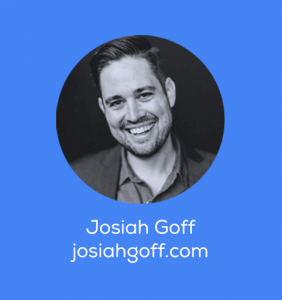 What’s your process for managing your inbox?

I mostly try to stay out of my inbox. This is a relatively new development for me. I hired an assistant about three months ago to slowly take over my whole inbox. My dream is that I don’t ever have to log into Gmail. The less I have to get in there, the better. It frees me up to focus on the things in my business that actually make me money or move the business forward.

I was getting to the point where I’d be working on client work or having sales calls, and it could be a couple of days before I had to check my inbox. Once I did, I’d be completely overwhelmed.

I tried different systems to wrangle my emails, but I didn’t find anything that didn’t require more work than I was able to put in. So I hired an assistant and she’s done a really great job.

How has that been going?

It’s been a slow transition. My goal for the first couple of months was for her to monitor the inbox, categorize things, start to get familiar with the types of stuff that come in and where that needs to go, and what things are important and what things aren’t. Now we’re transitioning to where she’s starting to respond to other people for me.

For example, I host a podcast called Content Heroes, and when I have requests come in for guest speakers for the show, I’ll give them a thumbs up or thumbs down or ask for more information. She has a script and a process and she will take over that conversation and handle all of that for me. She knows what I’m looking for and how to get them booked on the show if that’s what we want to do, so I don’t have to worry about any of that.

The other thing that she does is go through and categorize emails as something I might need to know but it’s not important, or something that needs a response. Those are the two main ones. On my phone I turned off all email notifications — which was a very freeing experience — so most of the time I don’t see emails come in. If I happen to see something before she does, I’ll star it so she knows not to move it out of the inbox.

Every morning she sends me screenshots of the list of emails for each of those tags, so I don’t have to log into Gmail unless there’s something that I need to respond to directly. I get my digest in Slack, because that’s what I prefer to use over Gmail. If there’s anything I need her to respond to for me, I let her know — usually inside of Slack — and she can respond to that person on my behalf. 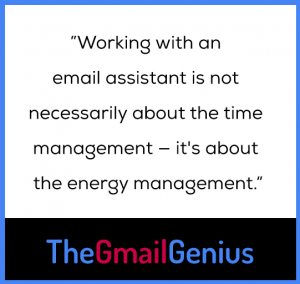 What does it look like when she responds on your behalf?

She responds as herself. She’ll say hey, I’m Virginia, Josiah’s assistant. I talked to him, here’s what he said. That way, if I happen to run into this person in the wild, there’s no awkward interchange where I have no idea what we’re talking about.

If I’m being honest, it’s also a bit of a positioning tactic so people know my time is very important: they realize I don’t even have time to manage my own inbox.

Before you started outsourcing email management, did you have any concerns?

My biggest concern was that important things would get missed. And there have been a couple of instances where some things have slipped through the cracks, but the difference is that now we can remedy that and put systems in place so that’s less likely to happen in the future.

Much less is slipping through the cracks than when I was managing it all myself. In the transitionary period we had two sets of eyes on the inbox, and over time I’ve logged in less and less.

How much time does having an email assistant save you?

It may be 30 minutes to an hour a day. It’s not necessarily about time management, it’s about energy management. The way I’m wired, if I log in and see 100 or 200 emails I have to go through, it’s super draining for me.

I want to be able to focus on the things I know I need to address, not sift through all this stuff to find those things. So even though it doesn’t necessarily save me a ton of direct time, it saves me a ton of cognitive load, which I think is more valuable than time because that’s energy I can put into things that matter.

Are there any tools or extensions that help you with email collaboration?

I would say it’s the combination of labels and the Todoist extension. The third thing that I use consistently is Loom to record screencasts. It’s a lot faster and easier for me to talk through the stuff that I need her to take care of, or give feedback on how things are categorized, than it is for me to type it out — which is one of the reasons I don’t like being in email.

It’s not always clear, and that’s why I’ve held off on the outbound stuff. We’re slowly easing into that. I don’t have her replying to a lot at this point. She won’t reply to anything unless I ask her to. If something comes in and I know that it’s not something that would take a lot of context for her to reply to, I’ll say, tell them this and she’ll take care of that for me.

When it’s a client, most of the time what they want is to make sure their email was at least seen. I’ll have her email them and say, I just want to let you know he’s gonna respond by tomorrow, so they have that sense that they’re going to get a timely response even if I can’t get to it right away. The more we do that, the more she gets familiar with my tone, and the more types of emails she’ll be able to respond to automatically. But for now, it’s only when I ask her to do it for me.

After I hired her, I listened to a podcast with Pat Flynn where he interviews his executive assistant who manages his inbox. That’s our aspiration: to get to their level of working relationship. As far as I know, he never logs into his Gmail. She says, these are the things that I need responses to and he tells her when he can get to them, and they sit down once a day, or probably more like once a week. She’s managing him and then he can tell her, this is what I would like to say. I think sometimes he’ll even record stuff and she’ll send it.

That’s something we’ve done before. Virginia will tell me, the client is asking about this and sends me a screenshot of the email. I’ll record a quick Loom video because it’s way easier for me. I’ll send that to her and she’ll respond to the client and say, I talked to Josiah, here’s his feedback, and they can watch the Loom video rather than me go in and try to take thoughts out of my head and put them into words. For me it’s a lot harder to make something sound good when I’m typing it out than it is to just talk.

If you could change anything about email in general or Gmail specifically, what would you change?

I would build more collaboration tools into Gmail itself. Right now, if I need to get Virginia to respond to something, I have to take a screenshot of it and send it to her in Slack. I could forward it to her, but then I’m just creating more email.

I’d love to have the ability to comment on an email inside of Gmail. There are some other email apps — I think Spark is one of them — that let you have that team collaboration. But Gmail, as far as I know, doesn’t have those sorts of tools built in. They have the ability for you to add people to manage your inbox, but that’s about where it stops. It would be nice to have that within the context of the email itself or alongside of it. So when you’re looking at the email, you can see the conversation that led to this reply, or whatever. I think that would make it more seamless to collaborate on these things. Then they could take that and connect it with the API to Slack, so she can click a button and send me a screenshot in Slack and I can respond and it comes back and is logged in Gmail — but that’s asking way too much.