How I Email: Dorie Clark, Marketing and Branding Strategist

Dorie Clark is a marketing strategy consultant, professional speaker, and frequent contributor to the Harvard Business Review. Recognized as a “branding expert” by the Associated Press, Fortune, and Inc. magazine, she is an adjunct professor of business administration at Duke University’s Fuqua School of Business. She’s the author of several books, including, “Entrepreneurial You.” Understanding your schedule is a key component of better inbox management, according to Dorie. 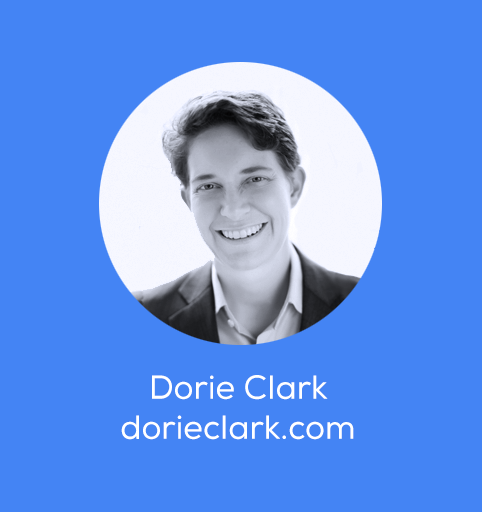 You’re a proponent of checking email first thing in the morning, which is counter to what some people recommend. Do you still subscribe to that?

I do still agree with that. A lot of research has shown that your willpower and ability to focus decrease throughout the day. That’s why a lot of people suggest you do your most important tasks first, such as working on a book, and turn to email later. This is a good principle, but I think sometimes it gets erroneously applied because there’s the assumption that all of what is in your email is not important.

That’s not actually true. What I discovered in terms of tracking my own email use is that the things that languished in my inbox actually required cognitive capacity for me to respond, so I kept putting them off because I didn’t have the mental bandwidth to make a decision. So, if you’re always doing email at a time when you’re tired and burned out, it will become very hard for you to make the decisions necessary to respond.

If I’m working on a specific work project, like writing a book, I might use part of my time in the mornings just to focus on that and turn to email later. But I would still do email first— at least a couple mornings a week—to clear out messages and respond to ones that are a little bit more difficult.

For instance, there was correspondence with my video editor about an online course that I’m creating, and I had to give him very specific feedback. Also, I was responding to the chief of staff for a prominent colleague, and we were talking about an initiative that we’re working on together. So, these are things that require extra care.

Do you have any rules for how often you check email?

I don’t have any hard and fast restrictions with my email use. I am the kind of person that needs a neat desk in order to feel that I am cognitively operating at my full potential. I can’t stand things being messy and the same is true of my inbox. I try to keep my inbox to no more than 50 messages at a time.

You wrote about using time tracking to analyze your email habits. What did you learn?

I decided to undertake a time tracking experiment because I’m a strong believer that we can’t effectively understand our schedule or take control of it if we don’t understand where our time is going. So, before I made any interventions to my schedule, I really wanted to understand what I was doing right and what I was doing wrong. I tracked my time religiously for a month and was able to get some very good data out of it.

I realized that email actually wasn’t something I spent an enormous amount of time on—a little less than an hour and a half each day. So, it wasn’t really that dire of a problem, but what was dire was the stress it was causing me. It made me really think about how to get to the root causes of that email stress, and in turn, prompted me to be far more disciplined about saying no to things.

It was just the sheer number of things people asked me. I discovered that 12 percent of my overall email total was people asking me for things—about 10 requests per day. And you realize if you’re saying yes to 10 a day, it really is taking your attention away from what you should be doing. 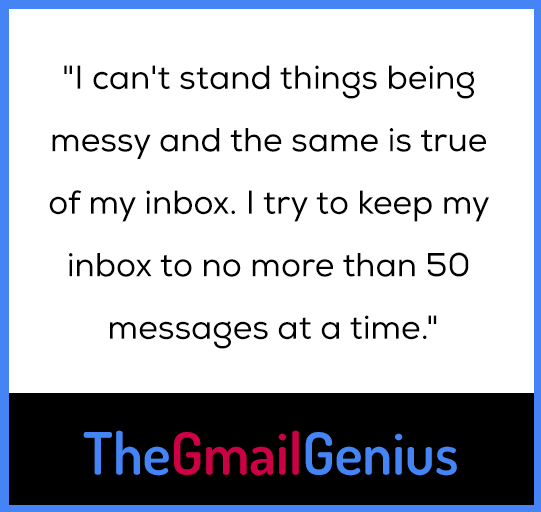 I’ve set some boundaries to try and make things easier. For instance, with something like book endorsements, I’ll endorse a book from a friend, but not from a stranger. I also realized if I’m endorsing a book, it takes a while to review their book and come up with a quote. Now I ask them to come up with a draft for me as a starting point, which I can then edit.

Also, sometimes you don’t want to say no completely, but you might want to say to a particular request. So, let’s say someone invites me a to a birthday party in Long Island. This is lovely, but it would take me an hour to get there and an hour to get back. And that’s a half-day investment to go to their party. And if it’s an incredibly special thing, you might want to do it. But if it makes no difference to them, you might invite them to drinks in the city after work, when they’re already going to be in the city and that way it’s easier for both of you.

Is there a tool or app that’s a game changer in managing your inbox and processing email?

One that I love is unroll.me, which allows you to very easily unsubscribe from mailing lists. But probably the most helpful thing is that I have a really terrific virtual assistant and we have a system set up in Gmail where I can route certain requests to her. And she’ll respond back to a person with the appropriate response very quickly.

What are your best tips for writing a cold email?

Obviously, the best strategy is to avoid cold emailing at all costs. When at all possible, you should try to get an introduction to somebody.

The issue is that most people really don’t take the time with emails. They’re very scattered and they take the “spray and pray” approach, where they email a hundred people and hope just a few get back to them. These days, people get so many spam pitches that are irrelevant.

I think the people who really stand out are ones who take a far more targeted and deliberate strategy. There was a woman who reached out to me with a great cold email. She was very familiar with my work and wrote me a note referencing some of the things that I had done. She said that she was in a certain city and knew I was going to be in that city and read that I liked to organize dinner parties. She said, “If you want to host a dinner party in my city, I’ll host it for you. I’m a professional chef and you can have it at my house.”

She told me enough about herself to really make her seem interesting and I did like her a lot when we met. Whereas a lot of people don’t try that approach. I just got an email a couple days ago from a guy who said, “Hey Dorie. I read your Harvard Business Review piece and it was great. Can we hop on a call next week?”

I had no idea who he was, and I had no context. He could be trying to sell me life insurance for all I know. It was the exact opposite of the chef who had done all this very deep research and made herself look like someone I would like to get to know.