GMass runs on a farm of Windows servers, and as the chief systems administrator, one of the constant worries in the back of my mind is whether any of the disks on any of the servers is near capacity. Naturally, I decided to Google “Windows disk space monitor”.

Given the usefulness of such a tool for any Windows server administrator like myself, I was expecting to be overwhelmed with viable options. Not only was I not overwhelmed, but the first two disk space monitors I downloaded sucked — to the point that I can’t even believe they are on the first page of Google. It goes to show that Google’s search results don’t always yield the best tools, just the most popular. Case in point, GMass is probably the world’s best Gmail mail merge tool, but a search for “Gmail mail merge” and GMass is shown near the bottom of page 1 and sometimes at the top of page 2. Yes, competition for that term is stiff indeed.

But I digress. Googling for “Windows disk space monitor” produces the following tools, and in this order:

Before I explain why 4 out of these 5 suck, let me first explain exactly what I wanted in the right disk space monitoring software:

That’s all — just two simple requirements that most software calling itself “disk space monitoring” software failed to meet. Let’s break it down.

The options to be alerted include: logging an entry in the Application Event Log, sending a network message to another server, initiating a performance data log, or running an EXE. That’s right — no email option, no text message option. How does Microsoft not understand the importance of email? They bought Hotmail in the late 90s, created Microsoft Exchange as their own email server platform, and now compete head-to-head against Gmail with Outlook.com. Yet the notion that a sysadmin would want to get an email to alert them of impending server doom is somehow lost upon them.

Why it sucks: No option to be emailed.

A simple, and supposedly free tool, that at first glance, I was convinced would solve my problem and my search would be over. Ehhh, not quite. Here’s a screenshot of the email settings. Let’s see if you can figure out what’s missing:

On the surface, it looks like it has everything you need to have an email sent to yourself when there’s a disk space issue. SMTP server, recipient address, From address. But wait…there’s no place to input SMTP server login information. Pretty much every SMTP server in the universe requires authentication by username and password (a few still let you authenticate by IP address), but given that there’s a thing called “spam” nowadays, Netwrix’s tool would only work circa 1999, when most SMTP servers were still open relays.

Why it sucks: No option to authenticate into the SMTP server.

Total misnomer. Does some cool stuff and generates a cool report, but it doesn’t actually do any monitoring. That’s right — while it can generate on-demand reports, if you look at its feature list, nowhere will you find the ability to be alerted upon low disk space.

Why it sucks: No actual monitoring.

I’m betting that this tool would have done exactly what I wanted, but figuring out how to get it to do it was a hurdle I was unwilling to cross. This tool does a lot. And as such, it’s UI is complex. All I cared about was knowing when my disks were about to fill up, and this tool does 1,000 things more. Along with installing three different applications (the Network Monitor, the Administration Tool, and the Enterprise Console) to your Windows Start menu, there are at least two different user interfaces to manage.

Here’s what I saw when I first installed and launched the tool: 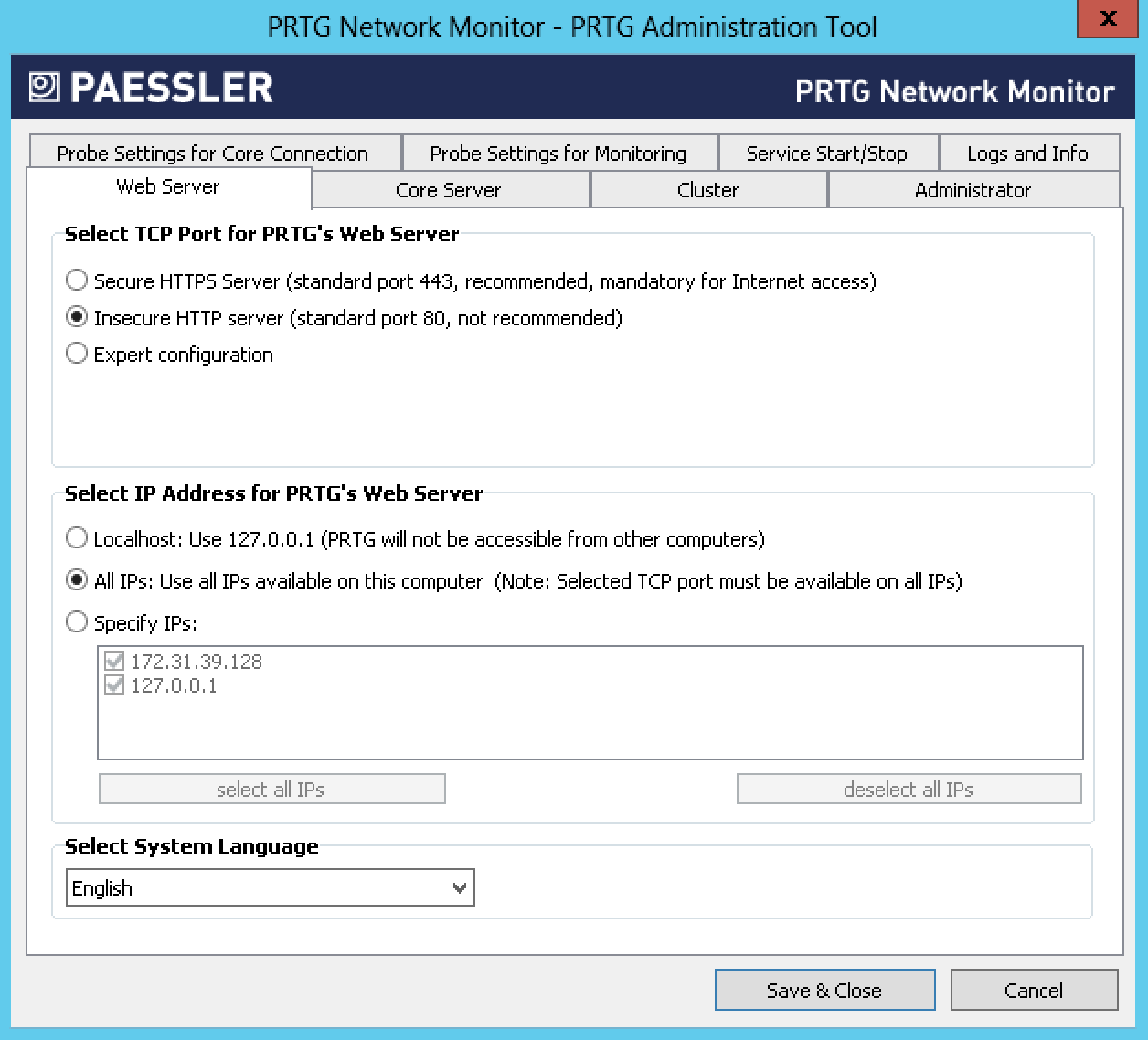 And here is the Enterprise Console. 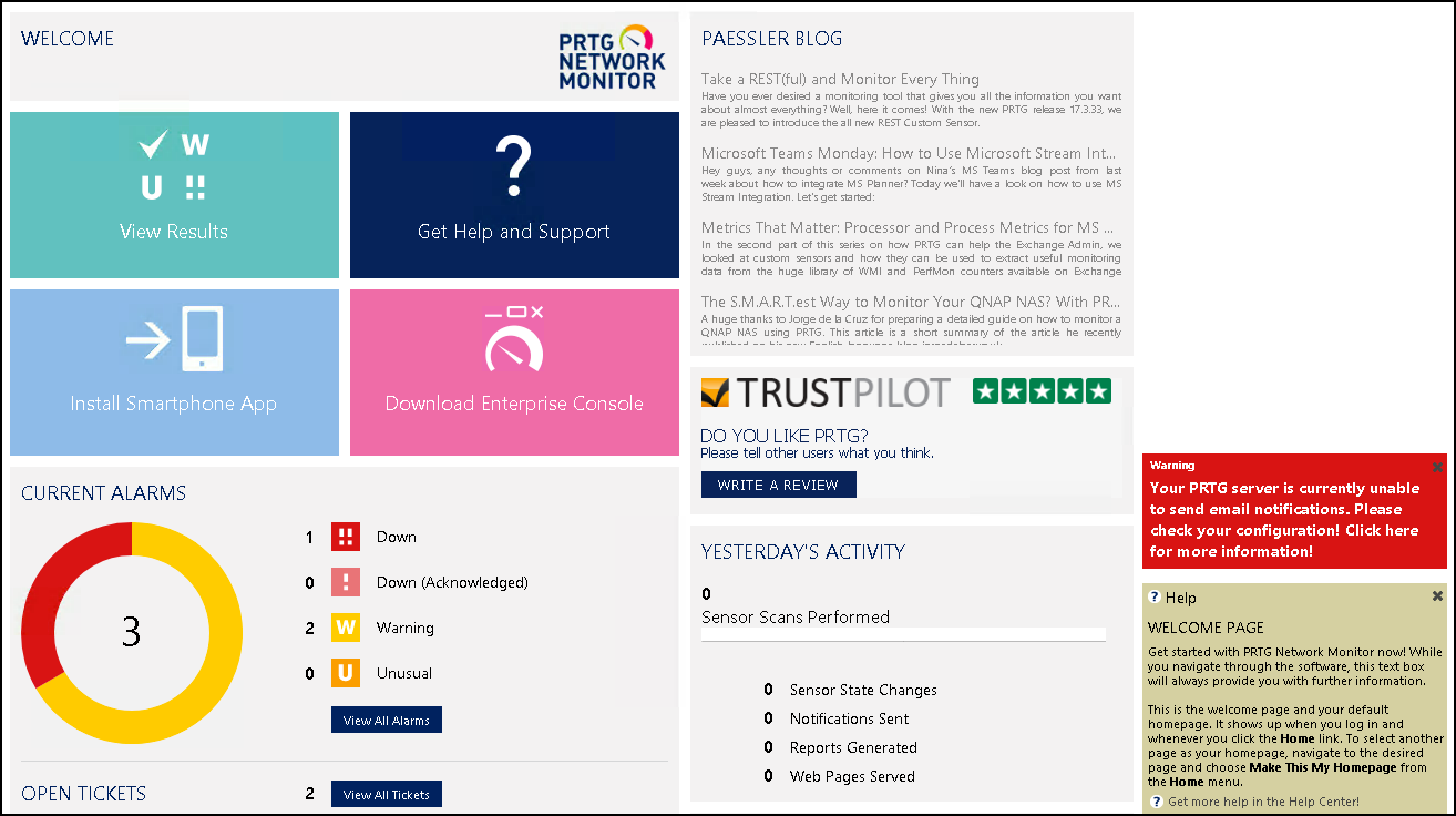 Do you see any prompts that ask at what disk space threshold I want to be alerted? Neither do I. Next.

Why it sucks: It probably doesn’t, but it’s complicated as hell.

Nice. It shows me my disks, let me check the ones to monitor, and set the free space threshold to be alerted.

And look at that…right below the space where I set my SMTP server, I set my SMTP server username and password. Beautiful. I think I have a winner, until I go to my second server to install it. The install fails because I have .NET 4.7 installed (the latest), and it ONLY works with 3.5:

Why it sucks: It requires a very specific .NET version, 3.5, to run. If you have anything greater, like version 4.7, which is the latest right now, it won’t install.

It doesn’t suck because it lets you configure a username and password for the SMTP server through which the email is sent. And finally, it doesn’t suck, because it will actually run on a Windows server with the latest .NET framework installed. Beautiful. We have a winner. It will, however, cost you $20 per license. But after all the effort I’ve put in so far, $100 for five servers is nothing.

Why it sucks: It doesn’t! It’s awesome.

After I found my winner, I stopped my search, but if you continue scanning through page 1 and 2 of the search results, you’ll find one more tool called Overseer. I did not sample this tool for my research, but if for some reason Advanced Disk Space Monitor doesn’t float your boat, check this one out, and perhaps comment on it below. It has a long hyphenated domain name, which looks unprofessional to me, but I forgive them because finding the right domain to launch a software product is damn near impossible these days.

Ready to transform Gmail into an email marketing/cold email/mail merge tool?
Only GMass packs every email app into one tool — and brings it all into Gmail for you. Better emails. Tons of power. Easy to use.
Try GMass for free
(download Chrome extension)
No credit card — or even sign-up form — required!