How to Write an Email Correcting a Mistake (Tips, Best Practices)

How to write an email correcting a mistake will come up in your email sending career.

So… what do you do once you’ve made a mistake in an email campaign?

Here at GMass we’ve helped people send more than 4 billion emails — and yeah, some of those have been apologies.

In this article, I’m going to walk you step-by-step through the best technique we’ve seen for sending a follow-up after an email mistake.

I’ll also cover some tips for how to assess and plan your correction after a mistake in a campaign.

And hey, no matter what mistake you made, remember this. At least you weren’t Adidas sending runners an email with the subject line, “Congrats, you survived the Boston Marathon!” only a few years after the bombing at the Boston Marathon. 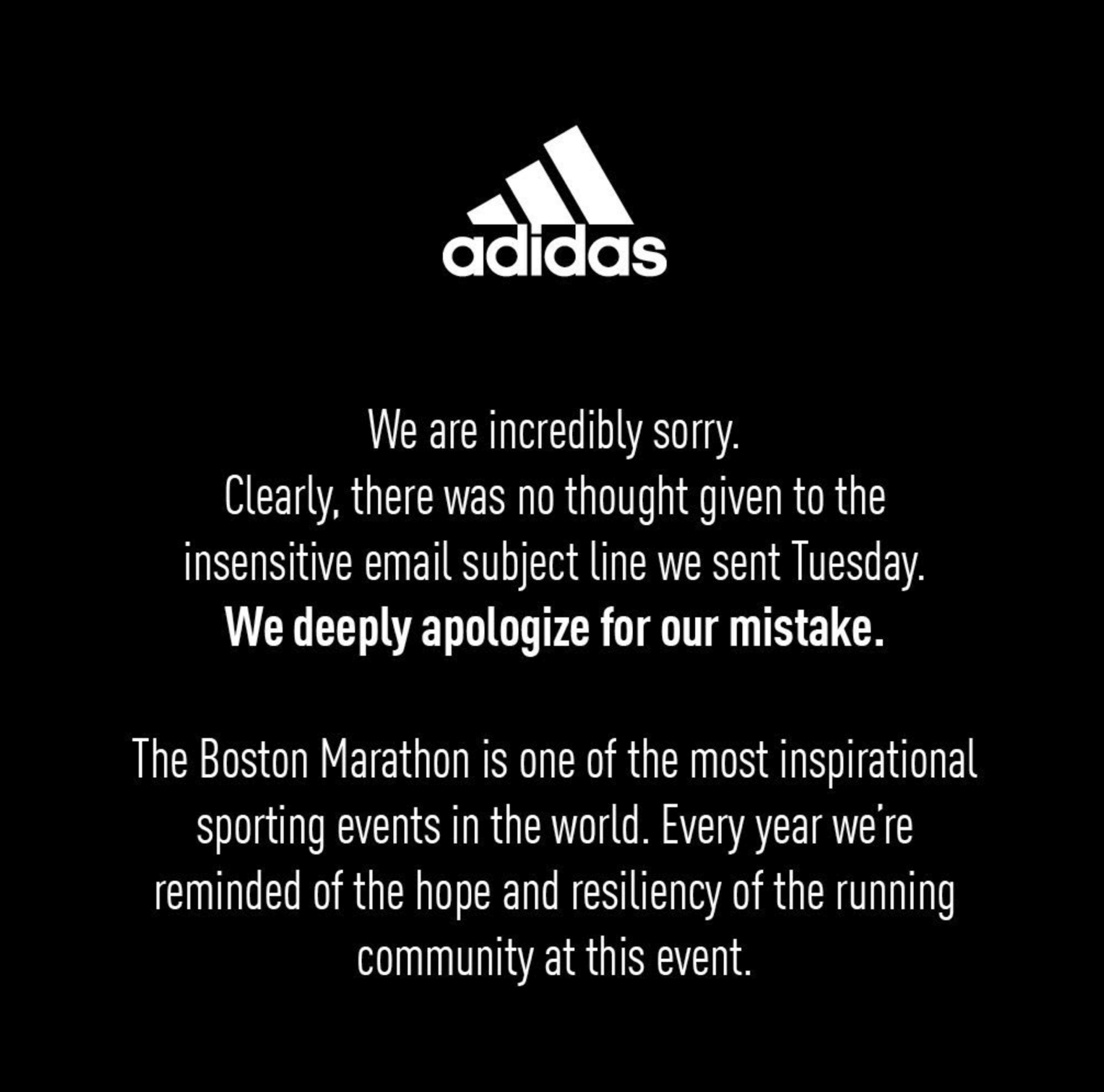 How to Write an Email Correcting a Mistake: Table of Contents

The most effective technique we’ve seen for sending an email correcting a mistake? Send a quick, simple follow-up as a reply to the erroneous campaign.

Build your list of everyone who received the previous campaign

First off, you need to put together a list of everyone who received the campaign with the mistake.

Our preferred technique is to use GMass’s segmentation feature. It’s a fast and easy way to get everyone from your erroneous campaign into a list for this follow-up.

…or by opening a Gmail compose window, clicking the GMass icon on the right side of the To field, then choosing From another campaign. 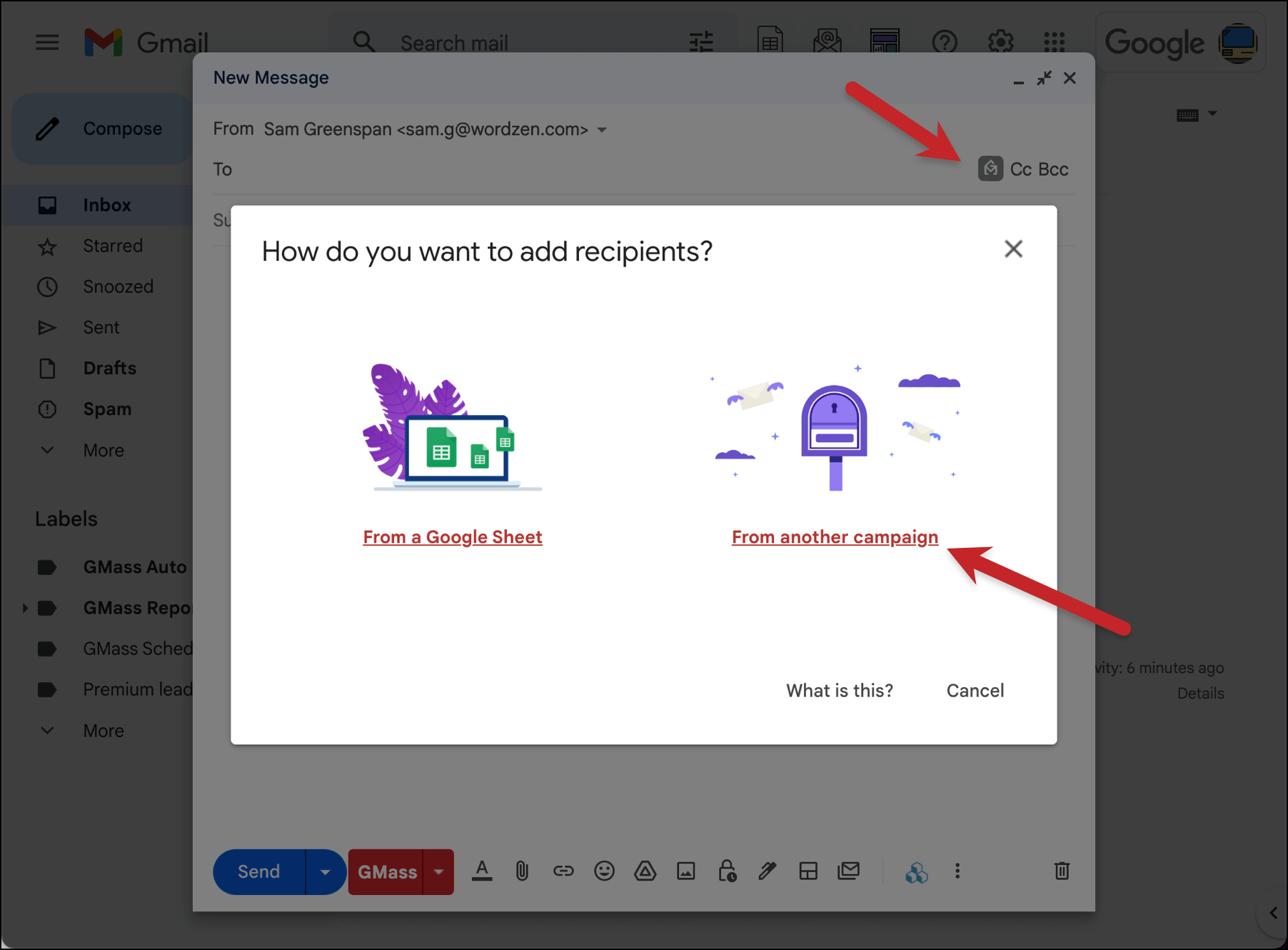 Then in the pop-up window, select your erroneous campaign from the Past Campaigns list.

And choose Sent as the group for your new follow-up. That ensures your correction email will go to everyone who received the first campaign. (Although GMass will automatically filter out any email addresses that bounced or unsubscribed.) 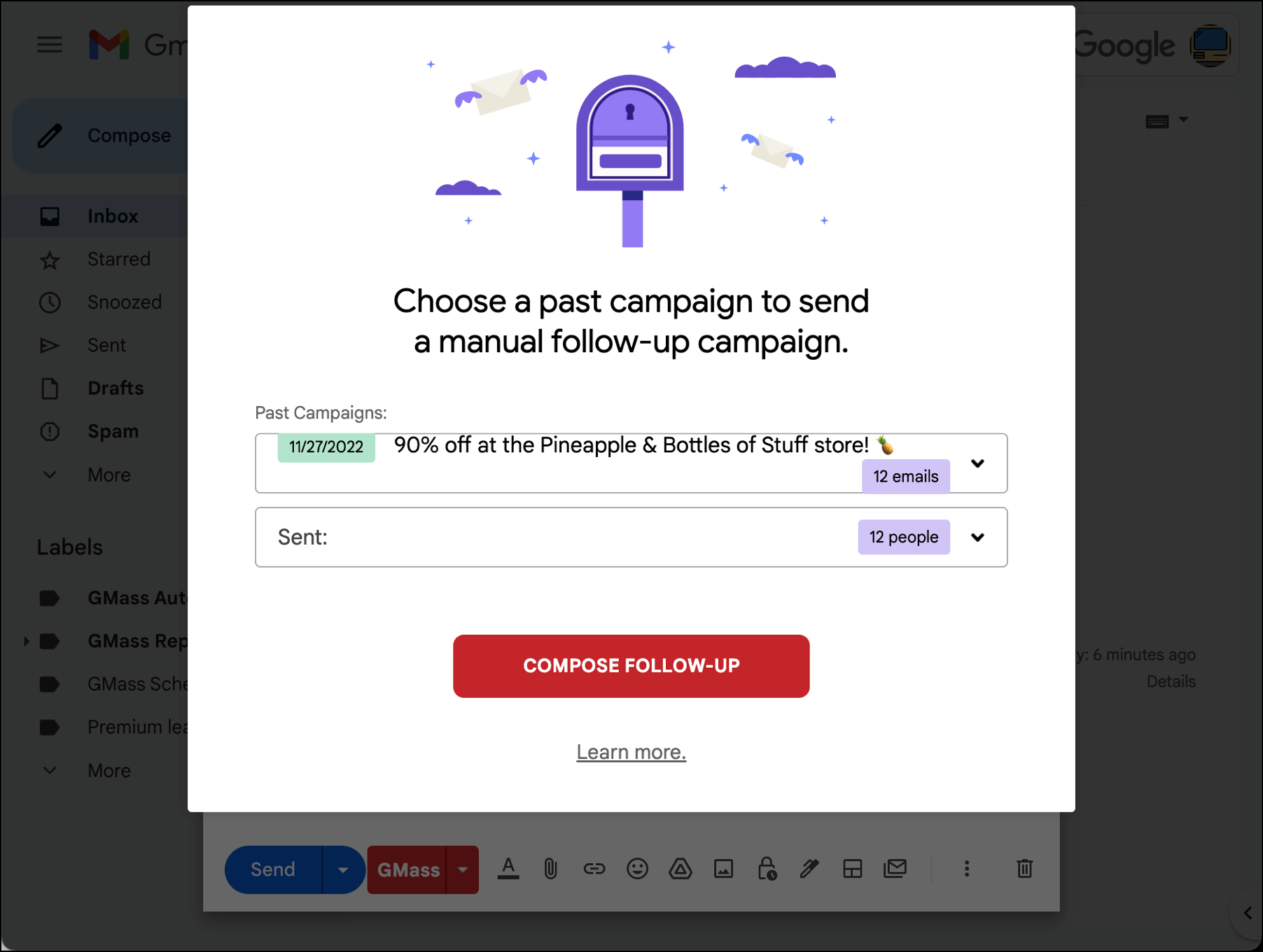 Click the Compose Follow-Up button. You’ll now have everyone from the prior campaign in a new list in the Gmail compose window.

Template for email correction to a campaign

We’re going for three things with our correction email:

You don’t have to self-flagellate or beg for the mercy of your subscribers. There’s no need to say, “We’re so sorry for this unforgivable mistake. If you want to unsubscribe we understand and we’ll never forgive ourselves.”

Simply own up to the mistake… share your correction or apology…  use your brand voice if you can… and get in and get out fast.

Oops, we did it again.

Earlier today, we sent you this email ☝️ with a broken link to our clearance sale.

– Your pals at [Company] 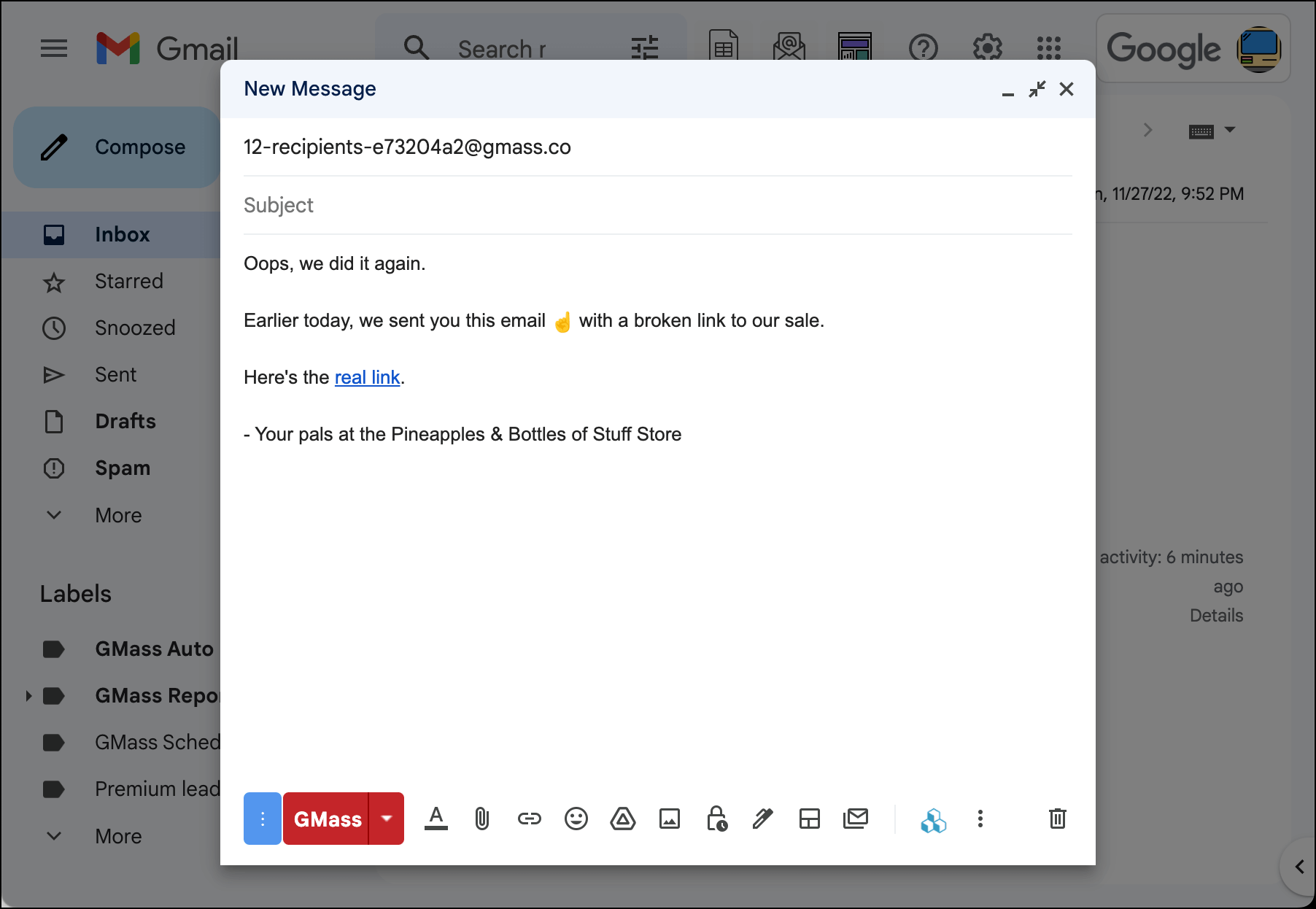 Send your campaign as a reply

Notice I didn’t set a subject line. That’s because we’re going to send this email correction as a reply to the prior campaign.

There are several advantages to sending the correction as a reply:

GMass makes it easy to send your email correction as a reply.

Open the GMass Settings box for the correction email and head down to the Advanced section.

In the Send As section, click on the Replies radio button. 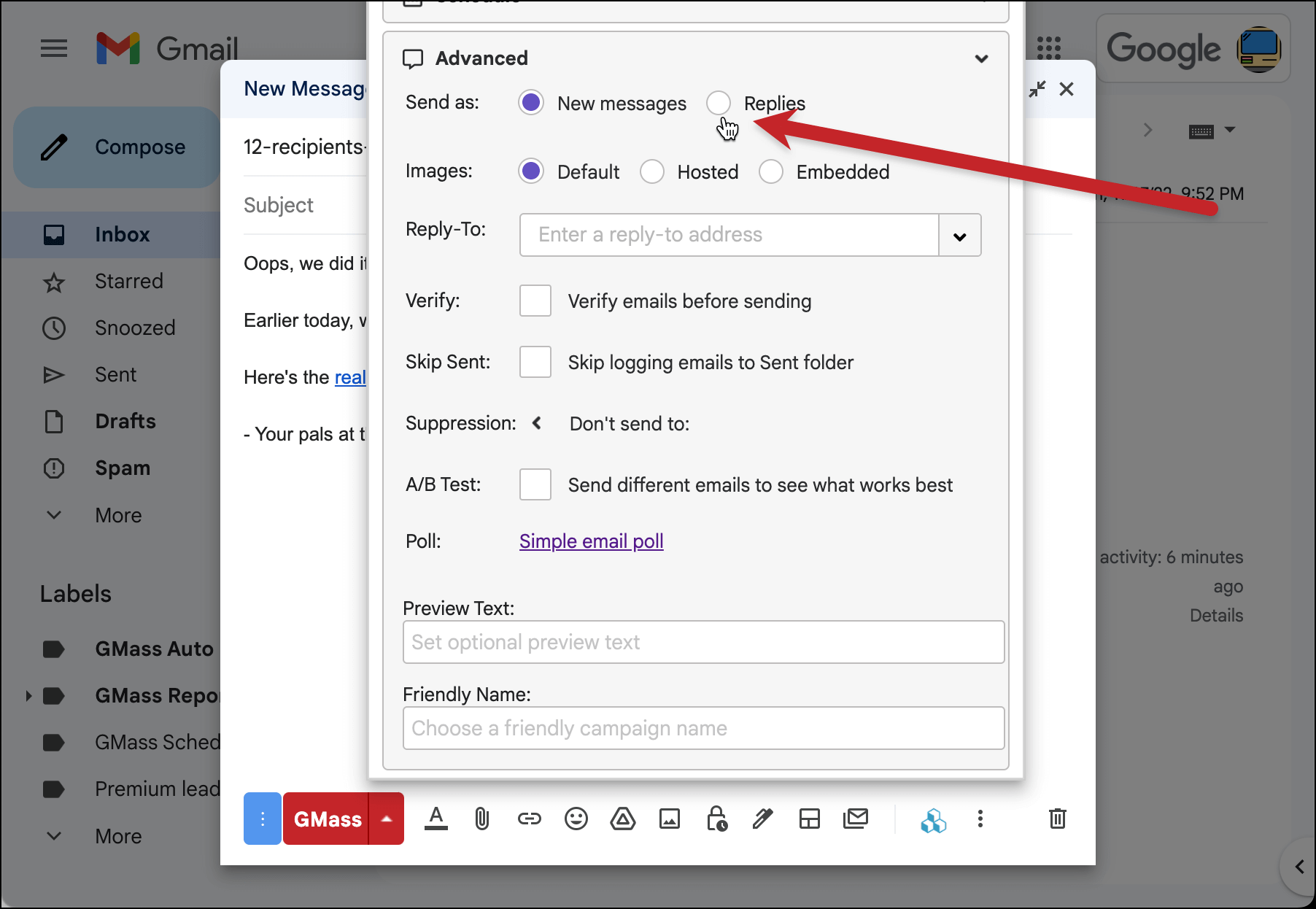 From the dropdown menu, choose your erroneous campaign. 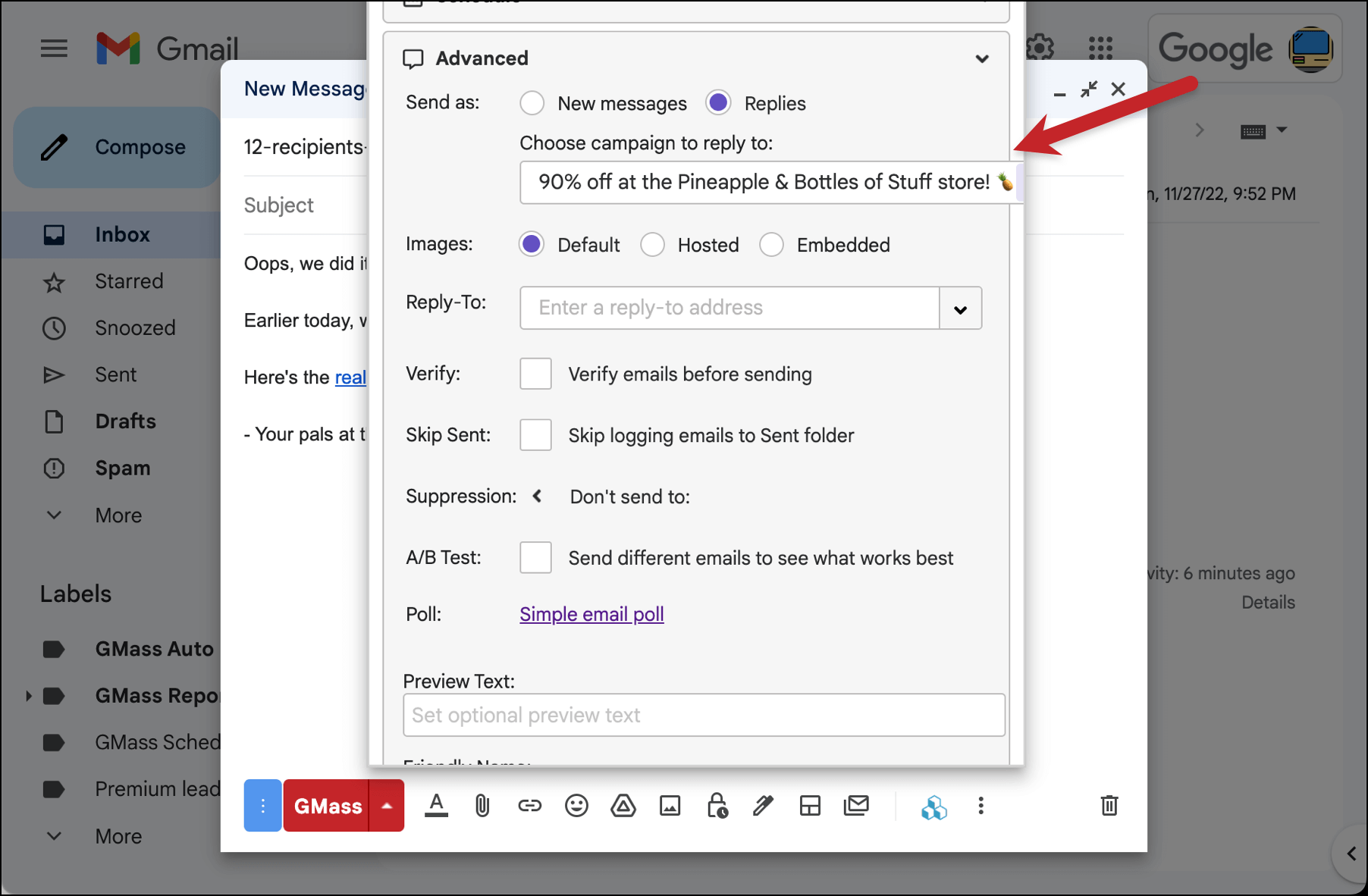 And you’re set. Now when you send this campaign, it will be a reply in the same thread as the email where you made your mistake. 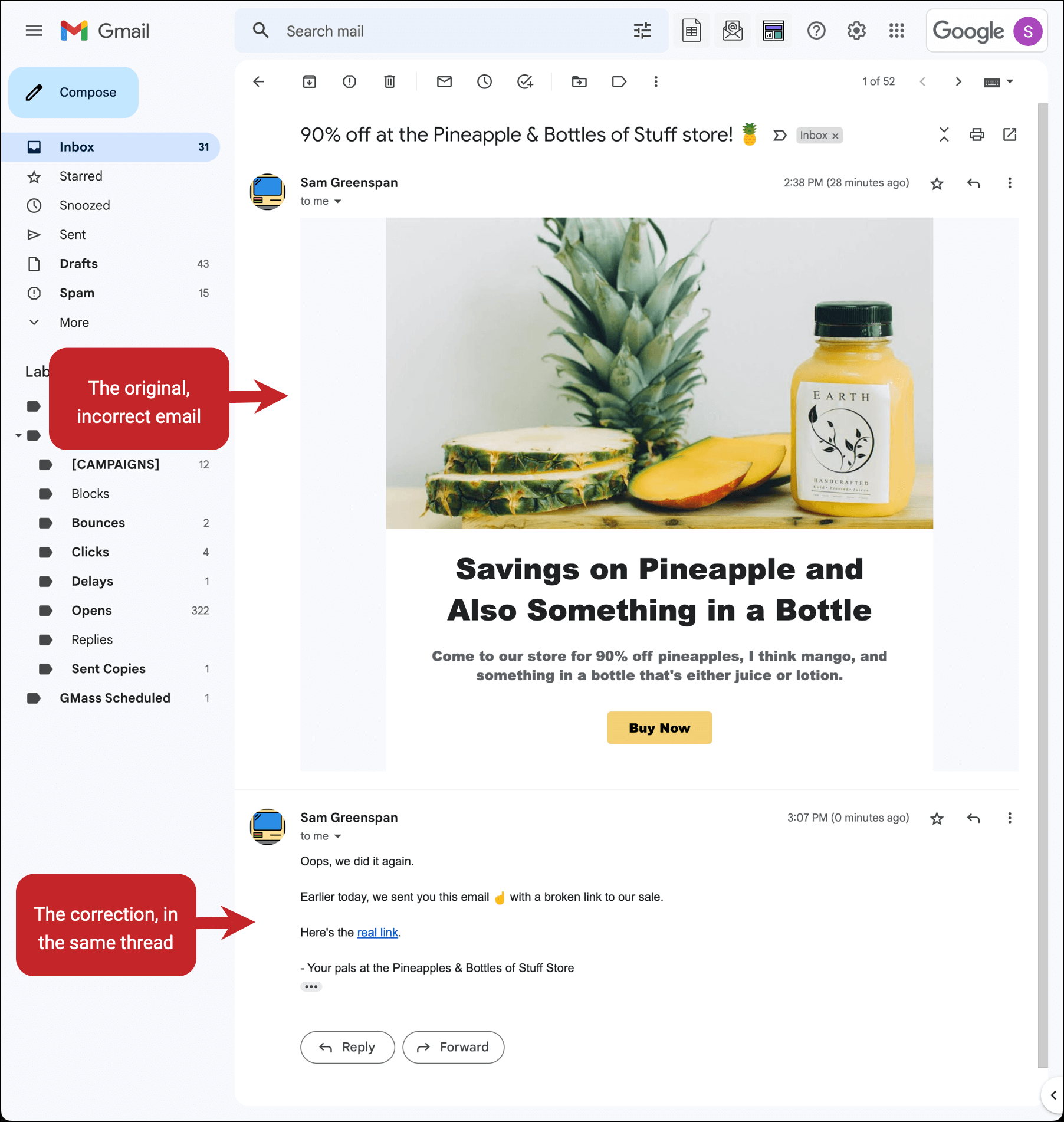 You’ve now corrected your email (and, we’re guessing, you won’t see many unsubscribes with this unobtrusive, concise method).

6 Tips for Sending an Email Correction

Here are the best practices for assessing the damage of an email mistake and writing and sending a correction or apology.

1. Undo send isn’t going to save you

Email platforms like Gmail and Outlook both an undo send option built in. But both have tiny windows of time where they’ll work. So unless you realize your error in a matter of seconds… you’re out of luck there.

And because of how email works, you can’t “recall” an email once it’s out. Once an email leaves Gmail’s ecosystem or Outlook’s ecosystem, other email servers receive it. And you can’t recall an email from those other servers — email protocols don’t work that way.

You’re not going to be able to “undo” your way out of this one.

2. Assess whether you need to send a correction

Do you need to send another email correcting your mistake?

If you made a typo, that’s embarrassing — but probably not worth a correction. And why shine a light on your mistake to people who didn’t notice?

(You’ll have to live with the eternal shame of sending a few thousand people with a subject line saying, “Your in luck.”)

But there are other situations where you should send a follow-up with an apology and/or correction:

As we covered earlier in this post, since you’re sending your correction as a reply to the prior campaign, you can and should keep it tight.

There’s no need to build a custom graphic to apology. You (hopefully) shouldn’t need to run the copy past 17 people.

Keep your correction email tight, send it fast, and you and your recipients can move forward.

Your recipients don’t care who’s at fault for the mistake. When you pass blame in your email, it comes off as petty as best and weak at worst.

I received this correction email from a brand recently. (I won’t shame them. This is all about not being petty, right?) But notice how oft-putting it is when they talk about who’s to blame. I highlighted it in the email below. 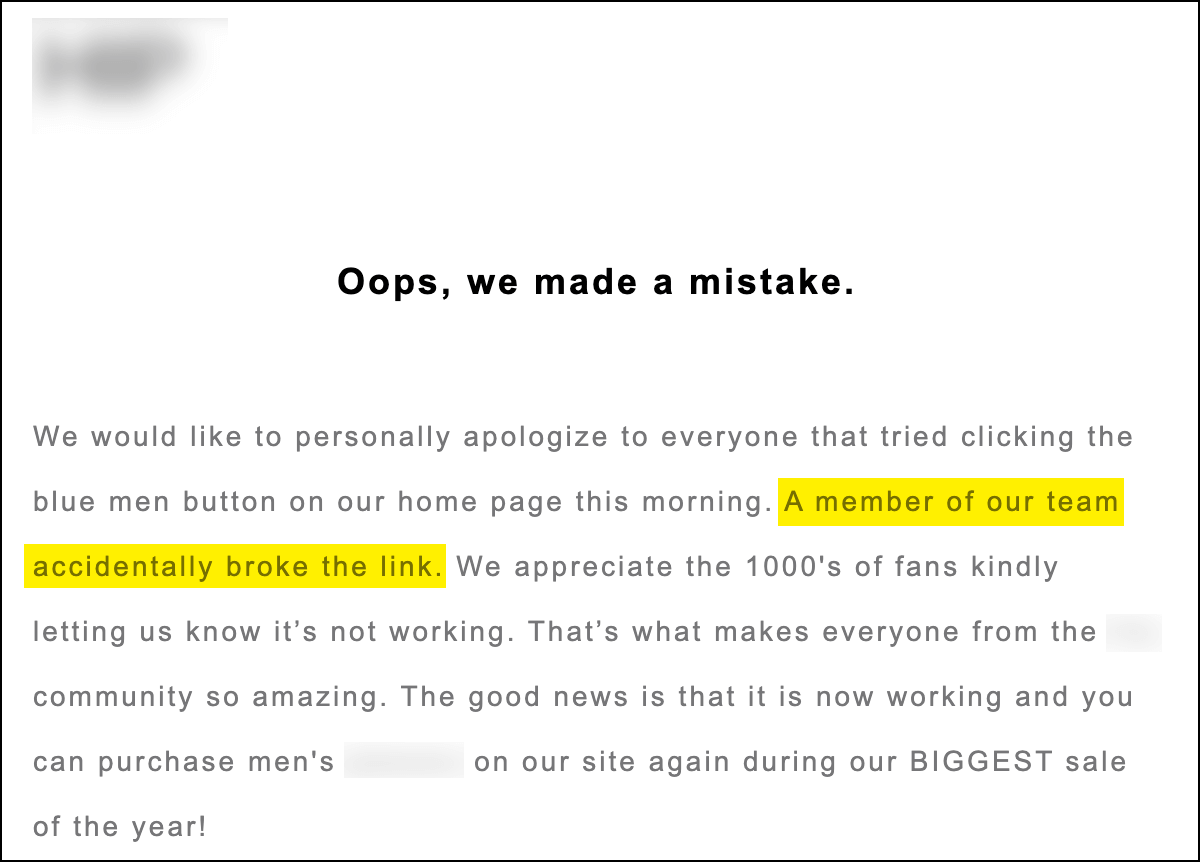 Acknowledge and own up to the mistake without passing blame. Your apology/correction is meant to serve your customers, not you.

(Side note: Never blame “the intern” as a joke. Do you really want people thinking the emails you’re sending to them are so low priority you’ve assigned them to an unpaid teenager?)

You sent an email with a mistake. You realize it later… maybe minutes, maybe hours. Maybe after a customer points it out. You panic. Your team panics. It’s code red.

Meanwhile… like the cliche says, no one thinks about you as much as you think about you.

Playing the average on open rate, most of your recipients haven’t opened your email to even notice your mistake. Even fewer clicked through.

And while some people were probably annoyed or frustrated by the mistake… they’ve all moved on with their day. Most have forgotten about it.

All this is to say: This isn’t a life or death situation.

Here’s an example from the pet store Alpha Paw. They kept this entire apology on brand and light (notice the apawlogize pun).

And this apology email also takes the email correction genre to its peak form, as we’ll cover in this next step…

6. Aim to turn your mistake into an opportunity

I’m full of cliches today (and also full of leftover pie), but as John F. Kennedy said, “When written in Chinese, the word crisis is composed of two characters. One represents danger, and the other represents opportunity.”

We now know he kinda misinterpreted the Chinese characters, but the spirit of the cliche lives on. There’s a bona fide link between crisis and opportunity.

After all, when you send a correction email, you:

So don’t be afraid to make a new (and better) offer in your apology email. 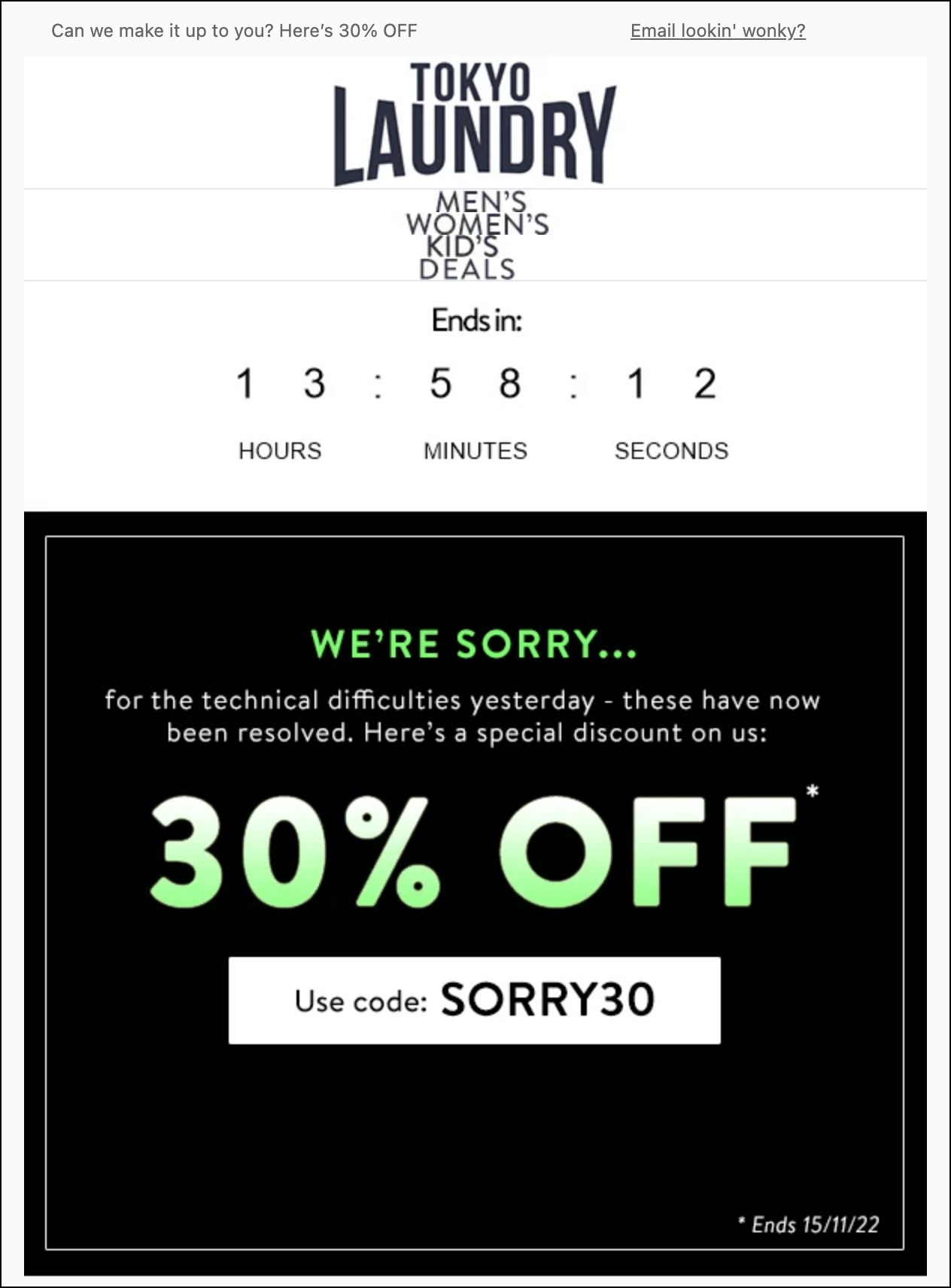 Who knows? Maybe the mistake can turn into an even more effective campaign for you.

How to Write an Email Correcting a Mistake: Takeaways and Next Steps

Mistakes happen in email campaigns. (Try searching your email for the word “oops” to see the surprising high frequency.)

So when you make a mistake in an email campaign and need to send an email correcting that mistake, here’s what to do:

As I’ve demonstrated through the article, GMass is a simple way to send a new campaign as a reply.

But if you’re not using GMass — it’s good for a whole lot more than killer apology emails.

GMass has more than 300,000 users who love its industry-leading features for cold email, email marketing, mail merge — or all the above.

Get started for free by downloading the Chrome extension. And you’ll be able to send 50 emails a day free — taking advantage of all of GMass’s features — until you’re ready to upgrade.