It’s like a vacuum cleaner for your Gmail Sent folder.

We’ve recently heard from users who don’t like the idea that if you send 500 emails to your list, there are then 500 emails in your Sent folder. That is the nature of email in general, to put every email you send in your Sent folder, and that’s how GMass has always operated. To satisfy the needs of these users, though, there’s now an option to skip having mass emails go to the Sent folder when you send a campaign.

Just check this box in the Settings panel: 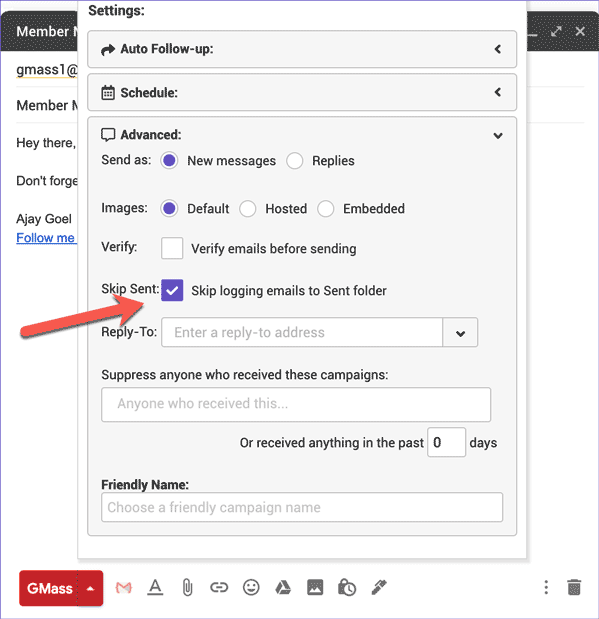 Try to avoid using this setting

For example, let’s say you send a campaign to 500 people and the Subject Line is:

This means, show me all the emails in my Sent folder except for the emails with a Subject containing the words “Member Meeting this Friday.”

Consequences of skipping logging to the Sent folder

If your campaign’s sent emails don’t show up in the Sent folder, there are several things that will be different in your email flow:

Then, when should you use this setting?

This option replaces the “Fast SMTP” option, which is no longer present

How is that possible?

When you send any email natively with Gmail, whether it’s with the normal Gmail Send button or the GMass Send button, Gmail automatically logs that email to the Sent folder. It requires an extra step for GMass to delete that email, if you enable that setting. When you send using GMass and a third-party SMTP service, by default, the email isn’t logged to the Sent folder; so now, if you want the email to appear in the Sent folder, it’s an extra step to log it there. That’s why skipping the logging slows native Gmail sending down while speeding SMTP sending up.

Delete permanently or place in Trash?

In most cases, GMass doesn’t have permission to delete emails permanently from your account. Therefore, when using this setting, the emails are placed in your TRASH, where they are normally deleted automatically after 30 days. Of course, you can also manually delete emails in your TRASH as well.

If you wish to grant GMass permissions to delete emails from your Sent folder permanently, bypassing the TRASH, then re-connect your account here.