So… Will Smith slapped Chris Rock on stage at the Academy Awards last week. You maybe, just maybe, have heard about it a few times.

The people behind the Oscars denounced the slap and immediately began to evaluate whether to take the rare action of expelling Will Smith from the Academy of Motion Picture Arts and Sciences — yes, even though later in that same evening, he won his first Oscar.

Will Smith couldn’t let that happen — after all, he still wants to be able to vote on Oscar winners and get to watch free screeners of all the nominated movies every year — so he did the only thing he could do. He sent a cold outreach email series to every member of the Academy, asking them to keep him in.

And Will Smith was so grateful for GMass, and how smooth it makes his cold email process, he forwarded us the entire cold email follow-up sequence so we could share it.

Here is the cold email series Will Smith sent to the members of the Academy to fight to keep his spot in the wake of the slap.

The first email: A personalized apology

Personal apology to {AcademyMemberFirstName} from Will Smith

I wanted to thank you again for my first Oscar last night. It’s going up on the mantle right now, I can finally throw those Grammys in the trash, know what I’m saying?

So everyone’s talking about what happened with Chris Rock and I wanted to personally apologize to you, {AcademyMemberFirstName} for my actions.

I know there’s gonna be talk of whether or not I should be kicked out of the Academy.

I’ll keep this fast: I want to stay. And as a thank you, if you do vote to keep me in, I’ll commit to making a sequel to {AcademyMemberFavoriteMovieAsLongAsItsNotWildWildWest}.

Please reply to let me know if we’re good and then for real. That sequel. Coming your way, summer 2024.

Will did a really solid job on personalization, using a mail merge to include each Academy member’s first name in both the subject line (to grab their attention) and the body of the email.

He also used personalization to make a compelling, targeted offer: to make a sequel to their favorite of his movies. It’s always good, within a cold email, to make it abundantly clear to a contact what’s in it for them. Will does that.

This cold email makes a strong appeal that should get good results from quite a few Academy members, especially ones dying to see Independence Day 2: Labor Day or Seven Pounds 2: Eight Pounds.

We also like the low-friction call-to-action at the end. Will’s not asking a busy person to grab 30 minutes to chat — he’s just asking for a reply to his email. By starting with a low-friction commitment, he can then work on the relationship and eventually make the larger ask.

It was also quite savvy of Will to use GMass’s built-in A/B testing to figure out which sign-off worked best: “stay fresh”… “stay dope”… or “stay jiggy wit it”. After all, you never know which small nuance might make a big difference in motivating cold outreach contacts to take action.

And finally, good call by Will using GMass to break Gmail’s daily sending limits — he sent this to nearly 10,000 Academy members, well over Gmail’s limit of 500 for a standard account or 2,000 for a Google Workspace account.

All in all, this is a strong first email in a cold outreach sequence that probably netted a lot of responses for Will that evening.

The second email: An attention-grabbing solution to a problem 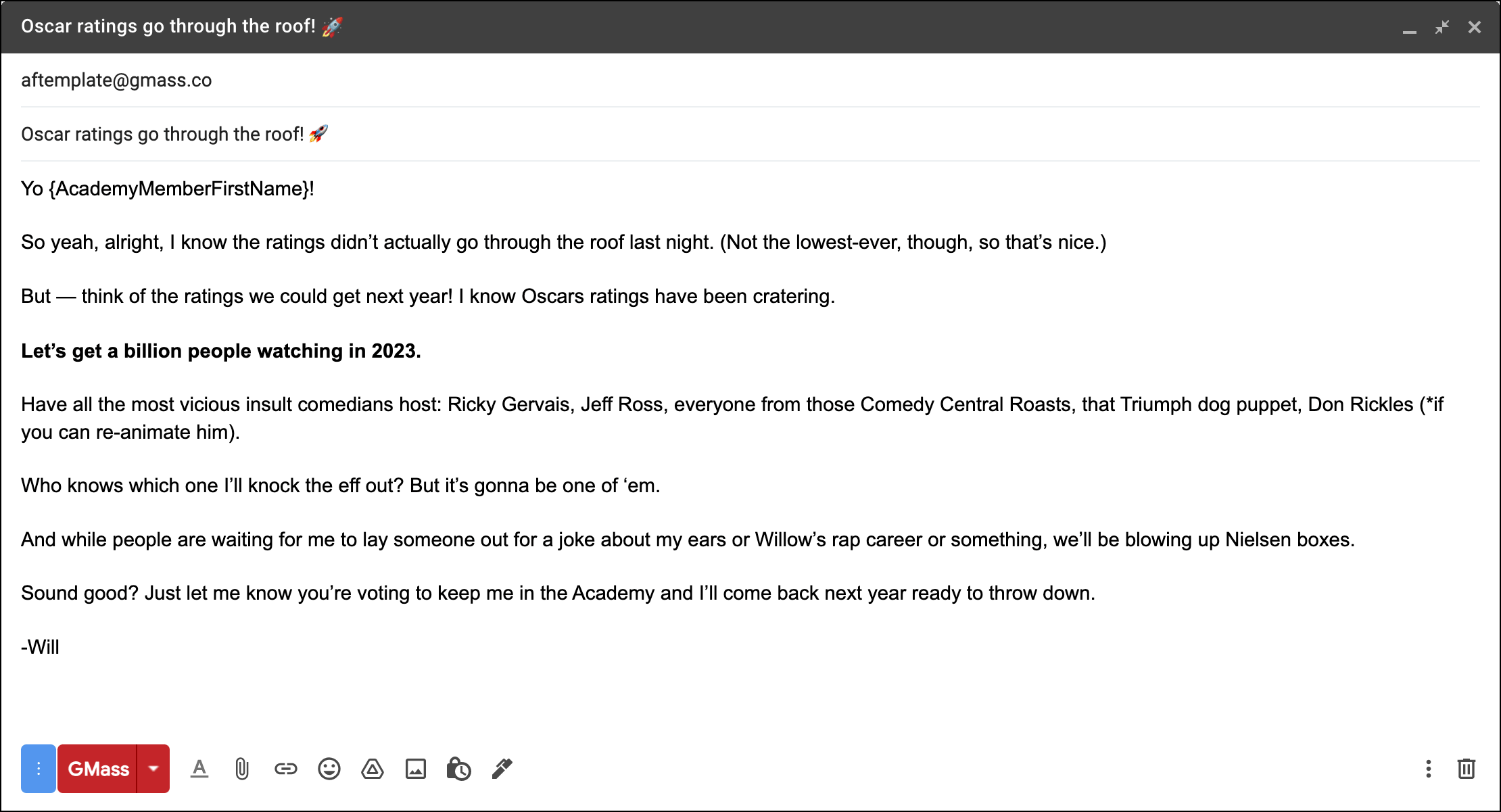 Oscar ratings go through the roof! 🚀

So yeah, alright, I know the ratings didn’t actually go through the roof last night. (Not the lowest-ever, though, so that’s nice.)

But — think of the ratings we could get next year! I know Oscars ratings have been cratering.

Let’s get a billion people watching in 2023.

Have all the most vicious insult comedians host: Ricky Gervais, Jeff Ross, everyone from those Comedy Central Roasts, that Triumph dog puppet, Don Rickles (*if you can re-animate him).

Who knows which one I’ll knock the eff out? But it’s gonna be one of ‘em.

And while people are waiting for me to lay someone out for a joke about my ears or Willow’s rap career or something, we’ll be blowing up Nielsen boxes.

Sound good? Just let me know you’re voting to keep me in the Academy and I’ll come back next year ready to throw down.

This is outstanding cold email copywriting because it’s focused entirely on the unique solution Will Smith can bring to the Academy’s biggest problem: The fact that they pull the same ratings as shows like Guy Fieri’s Grocery Games.

Anytime you can identify a prospect’s biggest problem and offer a clear, actionable, unique solution, you’re going to see results. In most cold email situations, this would be an ideal first email (Will’s case was a bit unique, though).

Two cold emails in less than 24 hours is more than the recommended frequency; however, because Will is dealing with a very time-sensitive issue, we can give him a pass.

The third email: A quick reply with a little humor 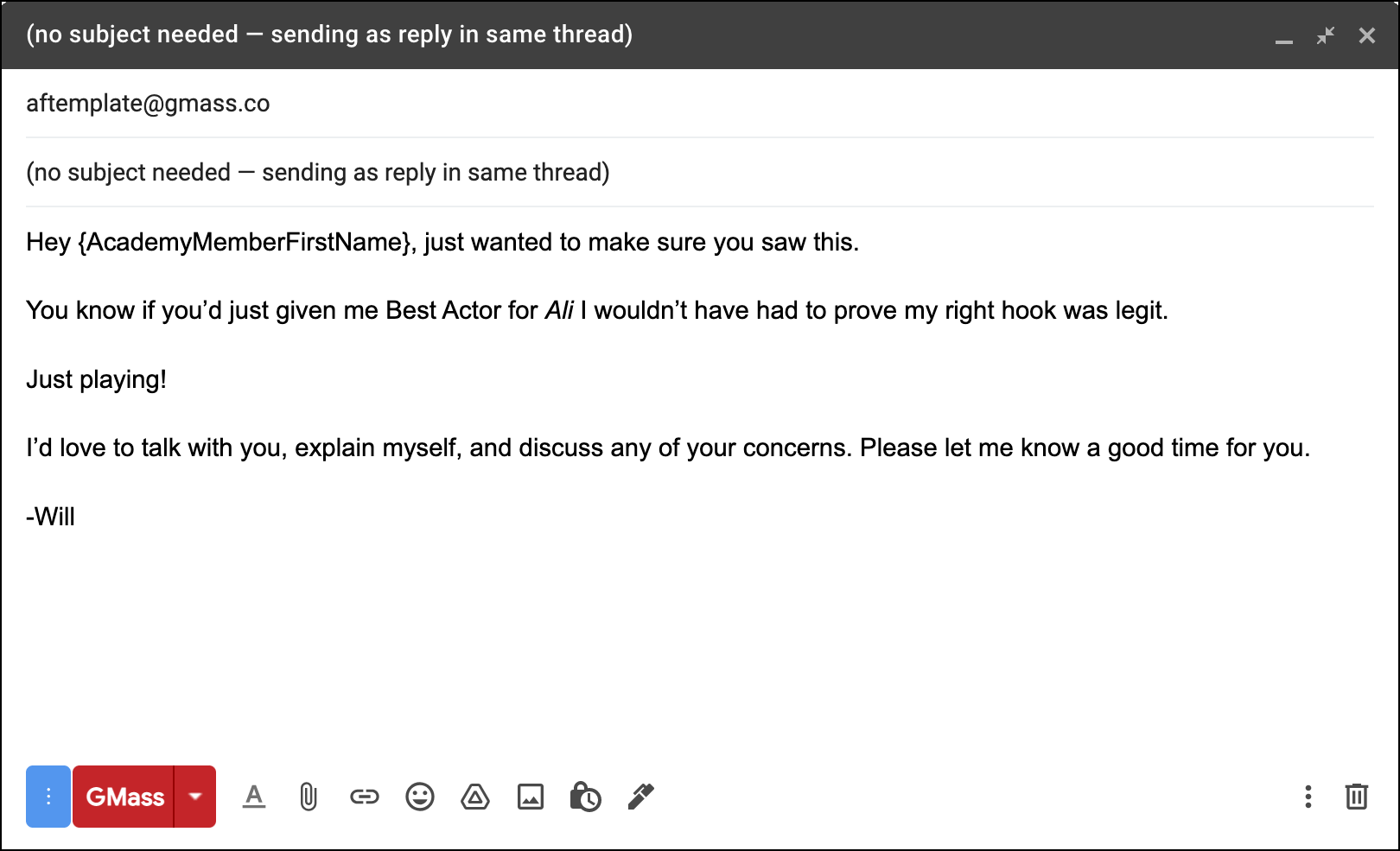 none (a reply to the previous email, in the same thread)

Hey {AcademyMemberFirstName}, just wanted to make sure you saw this.

You know if you’d just given me Best Actor for Ali I wouldn’t have had to prove my right hook was legit.

I’d love to talk with you, explain myself, and discuss any of your concerns. Please let me know a good time for you.

Will keeps it very brief here. He uses a self-deprecating joke — strategic humor can be very powerful in cold email — but then seamlessly switches gears into his request.

As we said before, his email frequency is high; probably higher than most cold email sequences. However, he’s doing a great job staying top-of-mind. It’s crucial to find that balance between emailing too frequently or not frequently enough.

We also like how he used a threaded reply here, rather than a new subject line. Even though this was a mass email, when the email comes to the recipient as a threaded reply, that better simulates how Will would email if he were doing this one-by-one. And that little detail can make a big difference in response rates.

none (a reply to the previous email, in the same thread)

Remember: Will in the Academy is good for ratings.

And come on. The other people you’ve kicked out of the Academy are guys like Harvey Weinstein, Roman Polanski, and Bill Cosby. I’m nowhere close to that bad! Those guys are like “get a time machine to stop them from being born” bad. I’m like “at most 5-10 hours of community service” bad.

Please let me know what you’re thinking and if there’s anything I can do to earn your vote to stay.

Will uses a different approach here, framing his request in a new light through a comparison. He’s contrasting himself with those horrible people as a different reason why he should stay in the Academy.

This is similar to, say, reframing the pricing of a SaaS product in a cold email as “for the price of a cup of coffee a day” instead of “$1,500/year.” It’s giving a new perspective to a target through grounding.

By adding this cold email tactic to his previous approaches (offering direct value to the recipient, a unique solution to a problem), Will could take some contacts who are on the fence and push them through to the final stage of the sales funnel, closing the deal.

The fifth email: The resignation 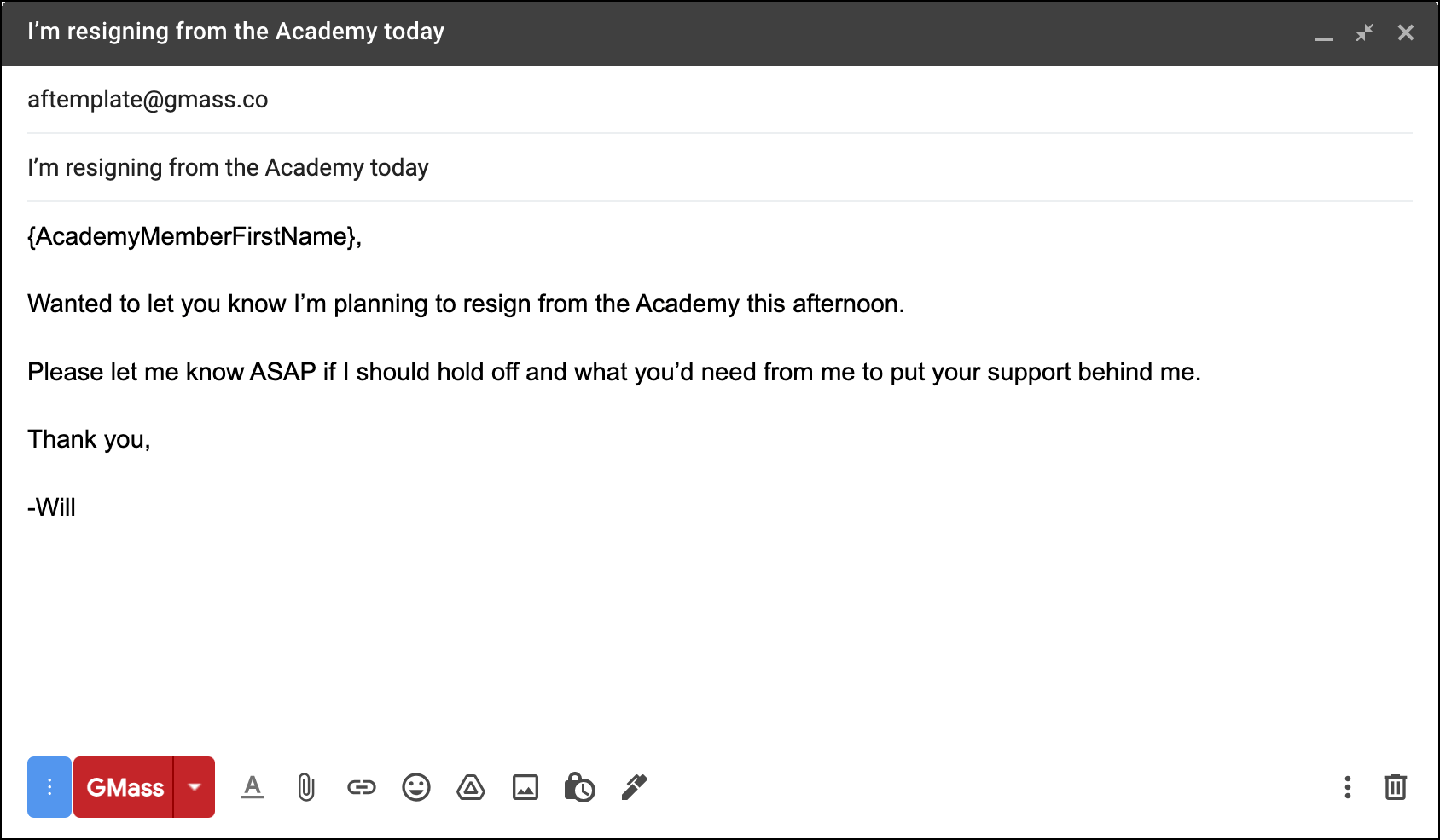 I’m resigning from the Academy today

Wanted to let you know I’m planning to resign from the Academy this afternoon.

Please let me know ASAP if I should hold off and what you’d need from me to put your support behind me.

After four emails without a response from the majority of Academy members, Will knew he needed to step up the urgency. Urgency is one of the most persuasive ways to get someone to act — but creating a genuine, action-driving sense of urgency is difficult. Will sets a clear deadline here and makes a strong, direct appeal for a response.

The sixth email: The last and final shot

The end of Will Smith and {AcademyMemberFirstName}??

Alright, {AcademyMemberFirstName}, I did it. I resigned from the Academy.

But I did it on April 1st for a reason. If you support me, and just a few more members of the Academy do too, I’ll play the “April Fools!” card.

So this is it. I’m shooting one last shot.

Here’s my “best and final” offer for you to throw your support behind me with the Academy:

Please let me know as soon as you can, my Hitch slots are filling up fast.

Will recognizes he’s hit his cold email endpoint with this potential target so he lays it all out there in one final blast.

He proposes the maximum amount of value he can offer while doing a pretty good job of not coming off as desperate.

He also does a nice job creating a sense of scarcity here, encouraging the contact to maintain the relationship and noting his slots to help people out with Hitch interventions are filling up fast.

If Will still doesn’t get a response after this sixth email, odds are he’s never going to get one. He might want to email the contact again down the road, when they might have new and different needs for what he’s offering. Today, though, they’re not interested — and it’s time to shift his focus to people who are.

Want to send your own great cold email series next time you have to apologize for assaulting someone on live TV (or, you know, to get clients or something)?

So we get it. You, like Will Smith, recently slapped someone in the face while millions of people around the world were watching. That’s the exact scenario for which we created GMass.

Well… maybe not that exact scenario. In fact, we’re fairly sure in GMass’s seven years and across our 300,000+ users, Will Smith is the first one to use GMass for this type of cold outreach mea culpa tour.

But whatever your cold email outreach needs might be, we’re pretty sure you’ll find what you need (and more) with GMass. It’s cold email right inside Gmail — no new email platform to learn — and works with your current email address. Create a personalized mail merge from a Google Sheet. Send automated follow-up sequences (like Will Smith did). Easily A/B test, schedule emails, and even break Gmail’s daily sending limits.

To get started for free, just download the GMass extension from the Chrome web store.

Wait. We just found one more email related to all of this. Anyway, try GMass. 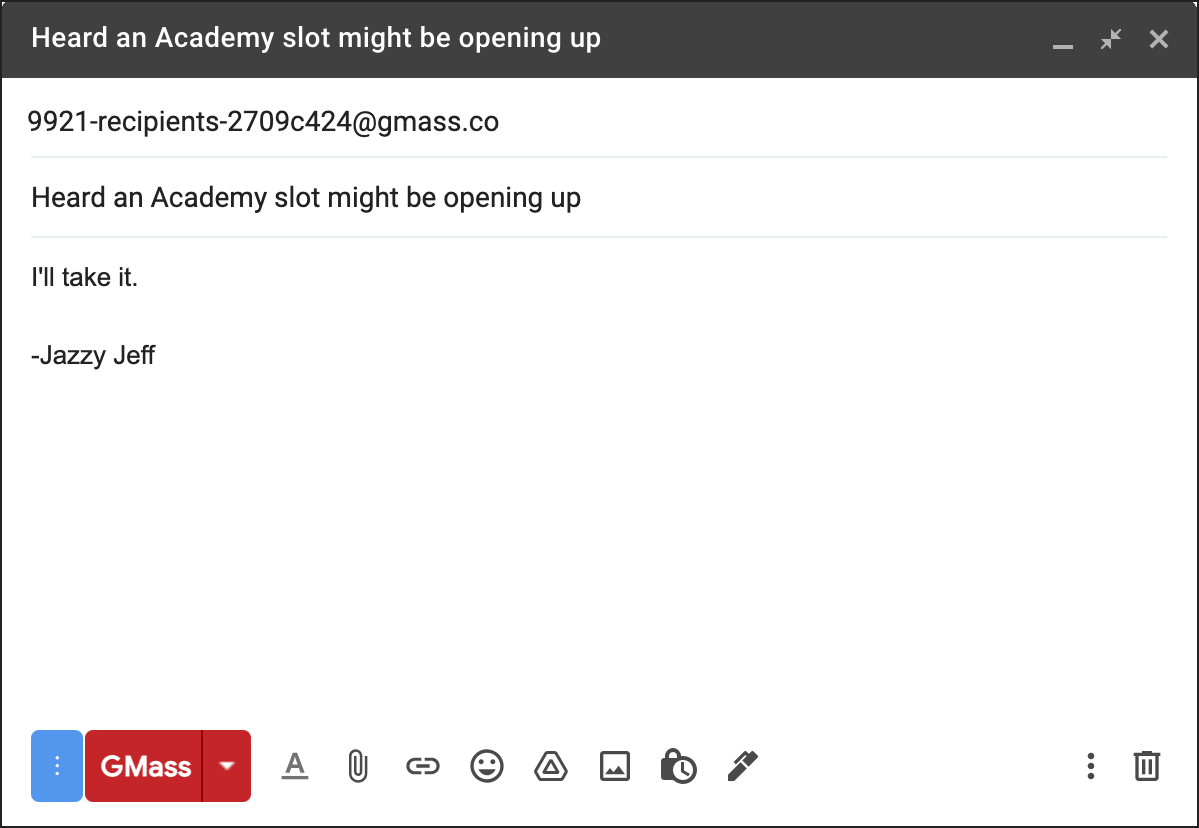