It’s important to personalize your emails. Now you can hyper-personalize your outreach emails with conditional content using simple If/Then statements in the Subject and Body of your message. Do you have to be a programmer to do this? No! We make inserting conditional content fairly easy. Use one of our copy/paste recipes and modify to your tastes. Let’s get started.

Conditional content blocks can be placed in the Subject and Message inside a set of double curly brackets, like so:

You can mix regular merge tags, which use a single set of curly brackets, with conditional code blocks, so: 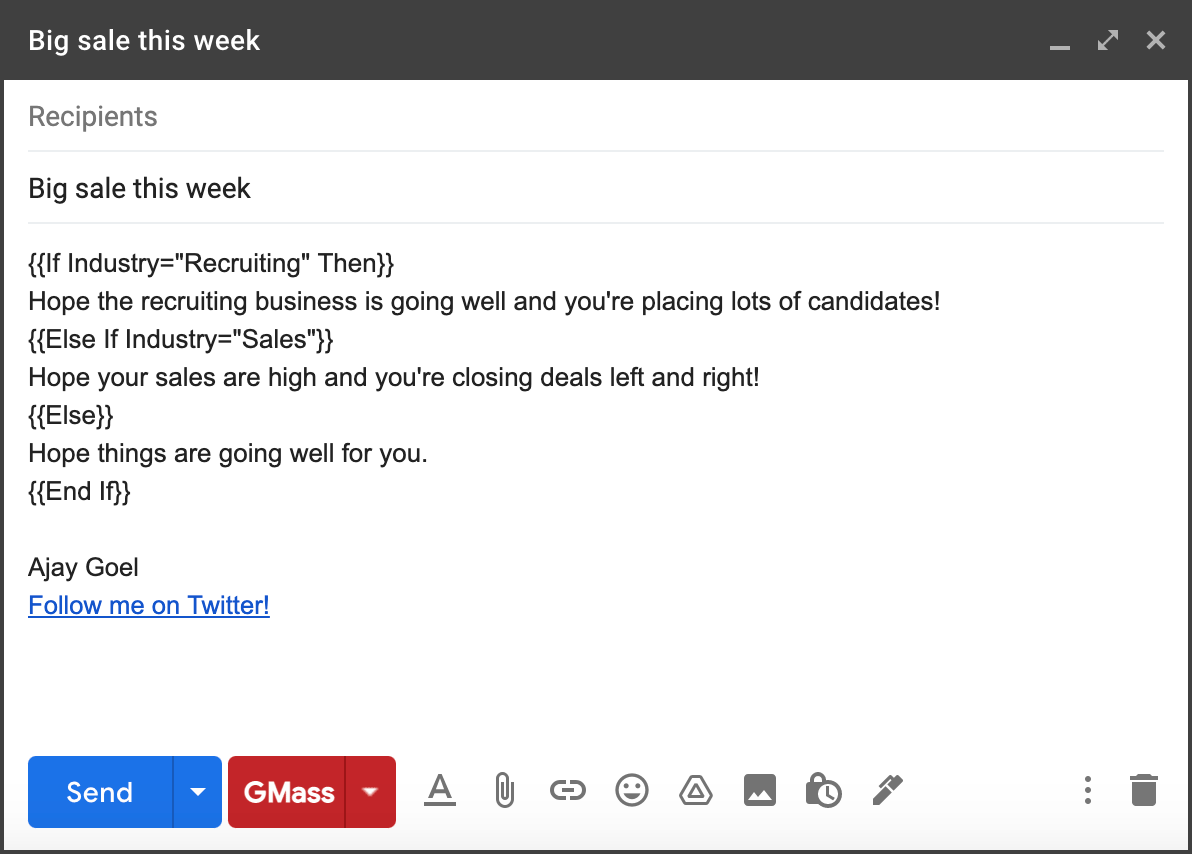 What statements can you use?

Let’s say you have a column in your Google Sheet called Industry that identifies the industry that each of your email prospects works in. 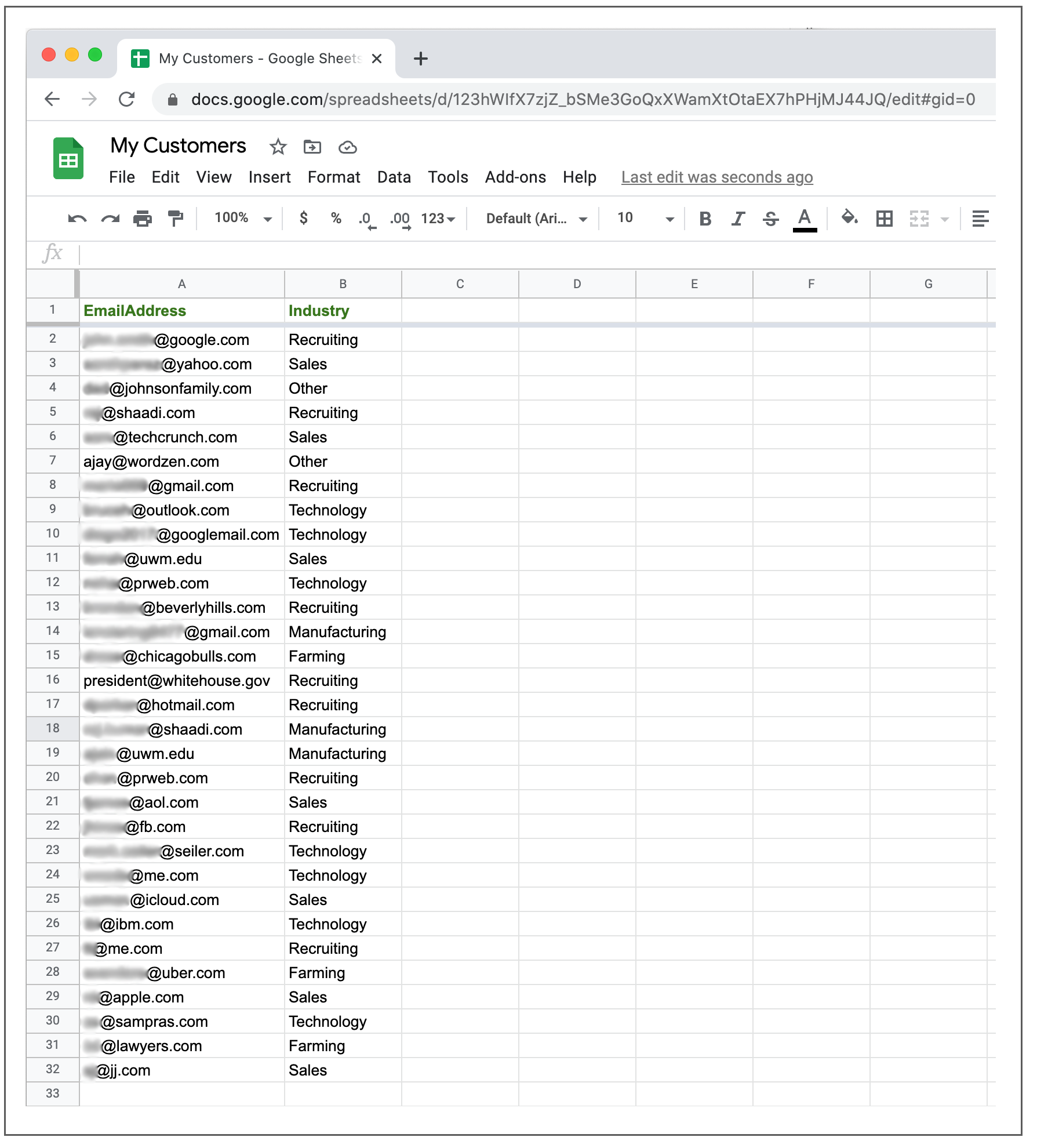 Our conditional content feature supports a bunch of statements, but the most useful will be the If/Then statement. Here’s an example.

A better way to do the above is to use an ELSE block.

In the above examples, I’m outputting text to my email based on the Industry column of my spreadsheet. Additionally, I’m using a regular “FirstName” merge tag in each of the code blocks.

If your Google Sheet has columns with numerical data, then you can use those to set content based on conditions. For example if your CRM system has a field called DaysSinceLastContact and you export from your CRM system to a Google Sheet, you might do this: 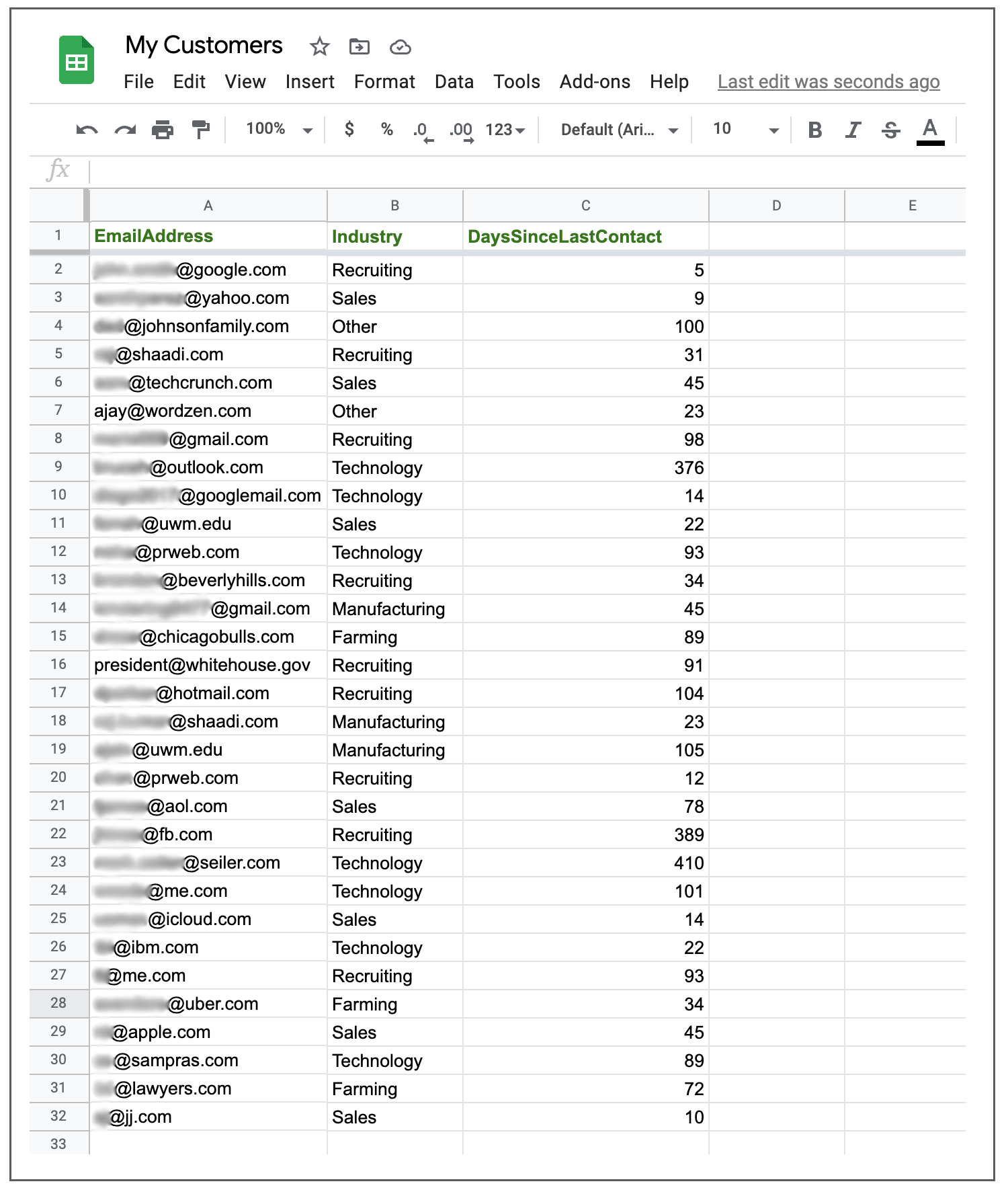 In the above example, it’s important to surround DaysSinceLastContact with the CInt command, which converts the column to an integer type, so that it can be properly compared to the integer 30. Without CInt, it would be compared as a string, and would yield different results.

Let’s say you have a column called LastPurchaseDate where you track the last time a customer purchased from you. You might want to vary some text based on how long ago your customer last purchased. 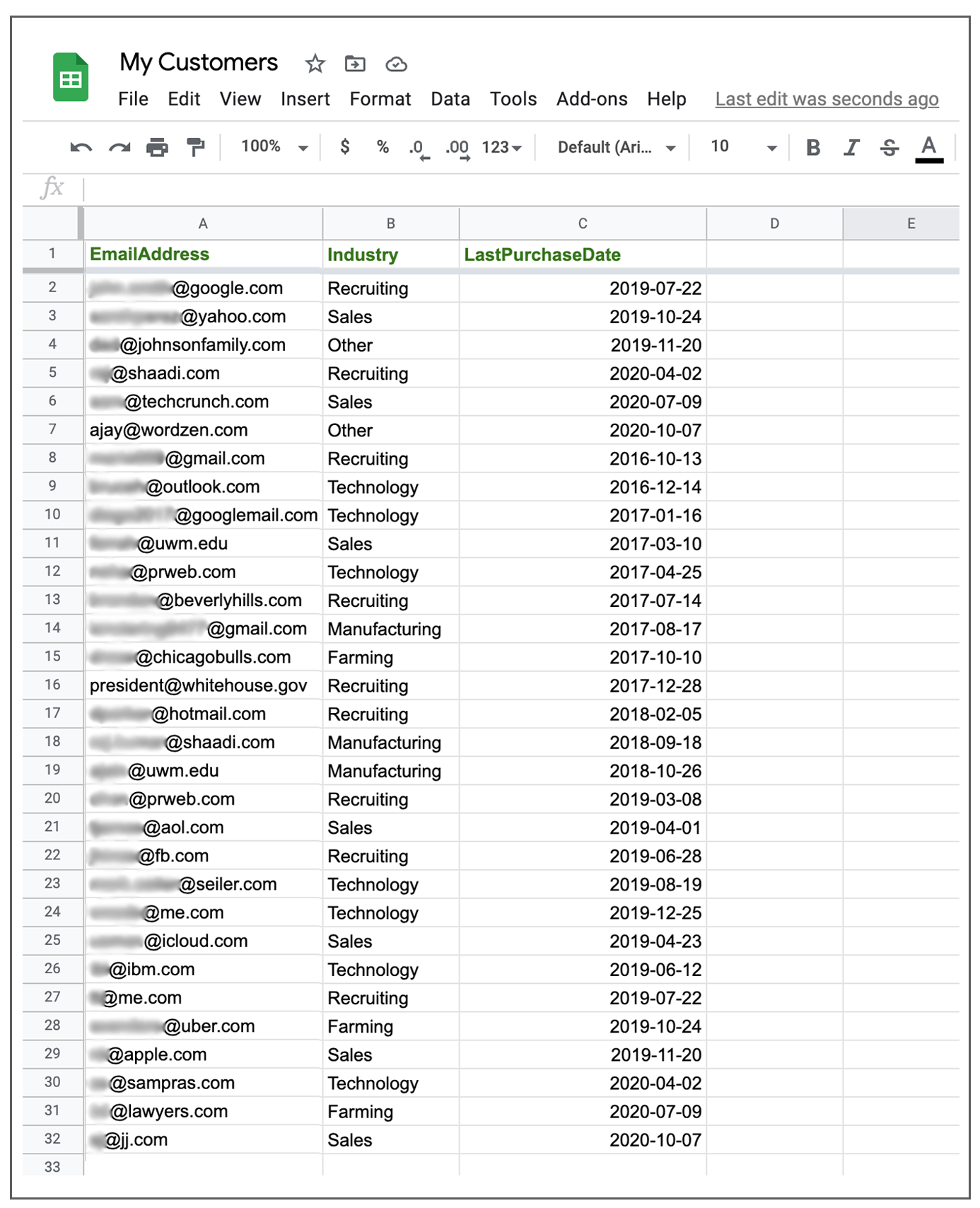 There’s a shorthand you can use for If/Then statements that goes like this:

In this example, if DaysSinceLastContact is greater than 30, then “It’s been a while…” is used, otherwise “Hope I’m not annoying you…” is used.

You can combine conditions with AND, OR, and parentheses.

You can also randomize text, based on a set of variations. Let’s say you want to provide a random greeting for each of your email recipients:

Example One: Getting rid of the annoying space in greetings 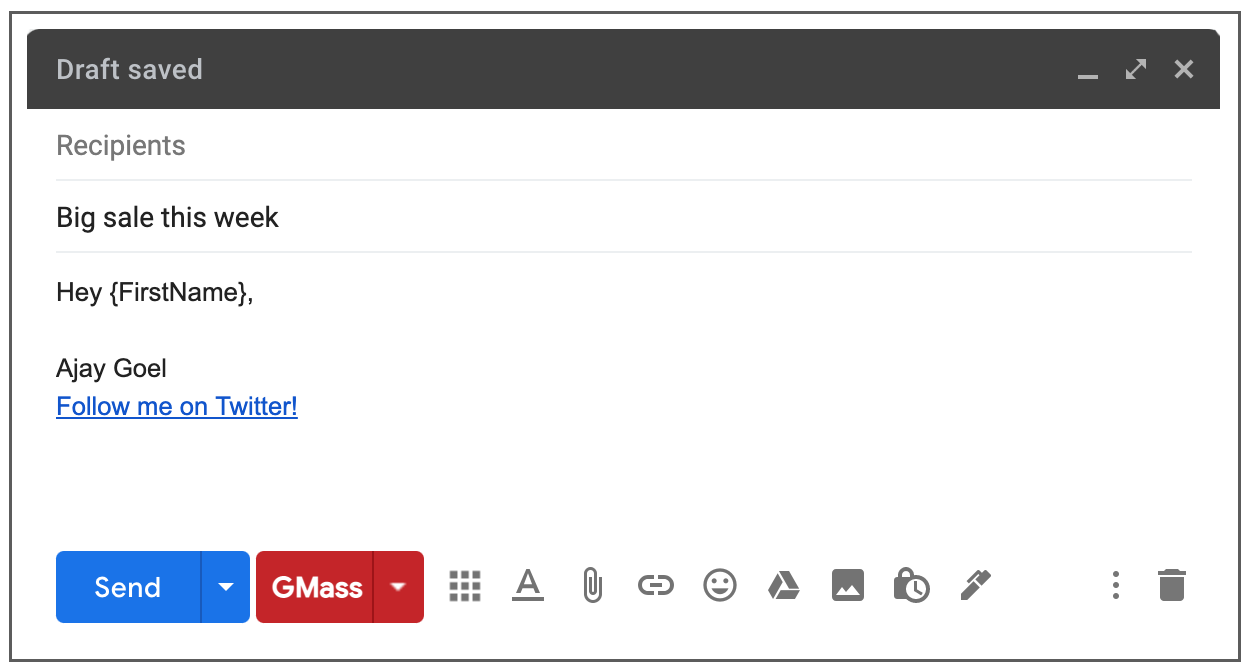 One of the personalization dilemmas every seasoned email marketer experiences at some point in their careers is dealing with the extra “space” in the greeting when you don’t know a prospect’s first name. Let’s say your email list contains first names for half of your email addresses only. You want your email to begin:

for those people where you know the first name, but just:

for those whose first names you don’t know.

If you compose your campaign with “Hey {FirstName},” then for the recipients that don’t have first names will see:

and now you see the problem. There’s that extra space before the comma. Conditional content solves this problem easily:

What this code block does says is, if the first name isn’t blank, then output “Hey {FirstName},”, and if it is blank then use “Hey,”. Problem solved, no extra annoying space.

Example Two: Greet people in their own language

If you know the country of each of your email list recipients, it’s easy to output the greeting in their primary language. For example, if you have a Country column in your Google Sheet, you can do this:

Here I’m using the Right command to examine the three rightmost characters of the EmailAddress value to determine if it’s a country-specific address. You can also parse string values with the Left command the the Contains command. A flawed version of the above sample looks like this:

Example 3: A SaaS platform emailing both free and paid users

As the creator of GMass, I send out an email announcement to all of my users whenever there’s a hot new feature I’ve just launched, like this one, ahem ahem. Now I can vary my opening line based on whether the user is a freemium user or a paid subscriber.

Let’s say I have a column in my spreadsheet called AccountType that is either “free” or “paid”. 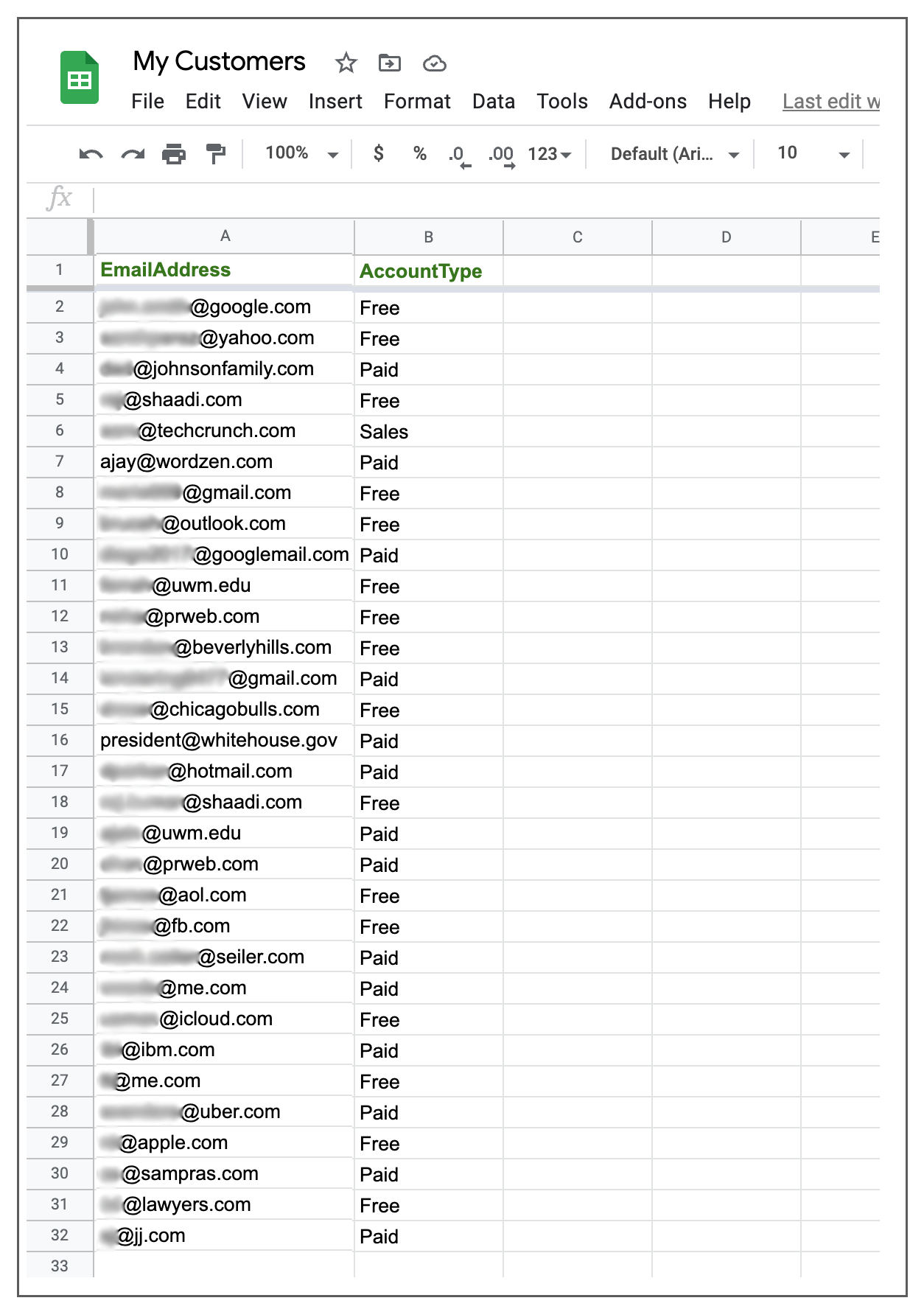 I used logic similar to this when I announced this feature to the entire GMass user base. See the exact email template I used.

When you write your script in the Gmail Compose, if you look at the HTML that’s created behind the scenes, you’ll notice that elements of your code are turned into HTML entities. For example, if in my Compose window I have: 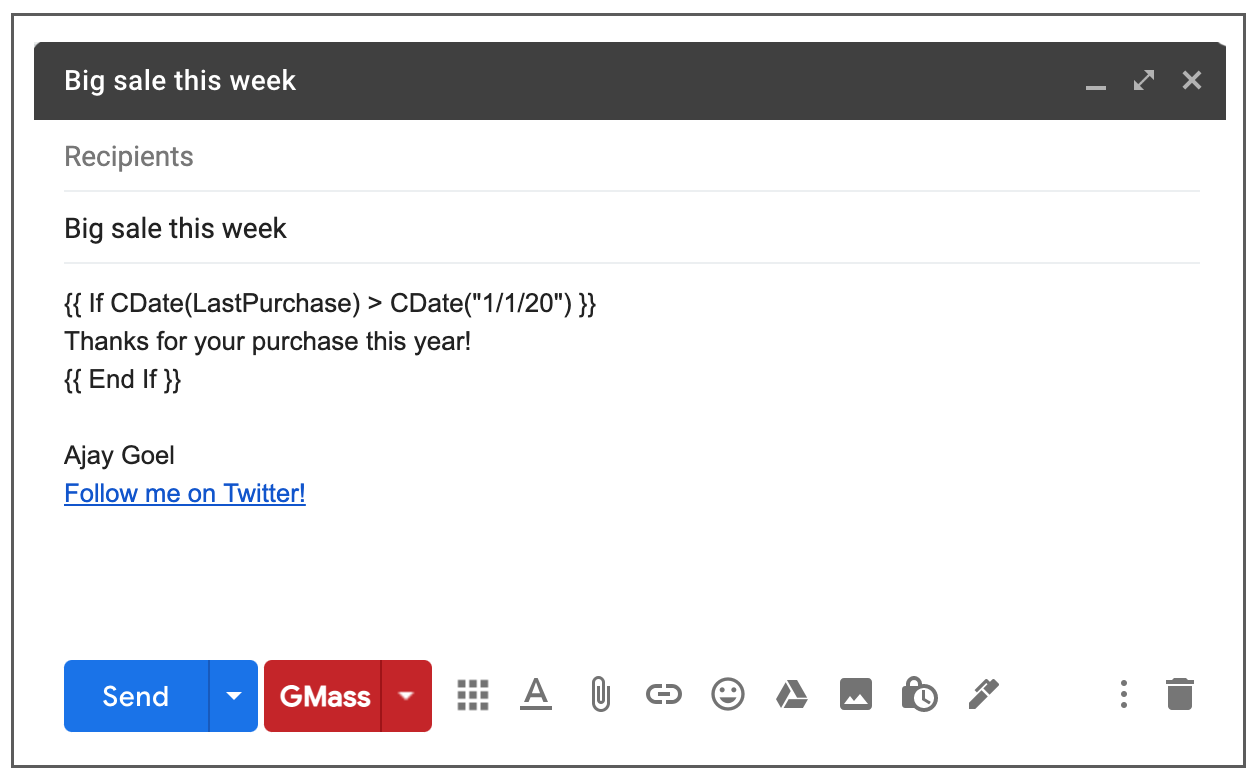 If I look at the HTML behind the Compose, I’ll see this:

Notice how the “greater than” sign has turned into the HTML entity &gt; instead of just the > symbol. GMass knows to look for those and treat them as their encoded equivalent, so you don’t have to worry that those aren’t actual double quotes. This is the benefit of building this feature from scratch with our own custom compiler.

Testing your script before you send

The easiest way to test your script to make sure your syntax is correct and your logic is correct is to:

By doing this, DRAFTS will be created for each address entered. You can use addresses from your actual list that represent different conditions and you can avoid having to use your own addresses to test what the final email will look like, since no actual emails will be sent when testing this way. Remember to set your campaign back to “Send emails” when you’re done testing.

Another way is to create a separate Worksheet in your Google Sheet containing just sample rows using test addresses that you own and then sending a test to the addresses in that Worksheet prior to sending to your full list.

In our document on using Google Sheets, in the section on formatting we recommend that column headings contain only alphanumeric characters and no spaces. That means using column headings like “FirstName” rather than “First Name” or “First-Name’. This is to ensure the highest accuracy with personalization as possible. Spaces and non-alphanumeric characters introduce edge cases which can cause unexpected results. For example, if you use “First Name”, and then when you use the merge tag {First Name}, the two words end up getting split onto two different lines, that will break personalization.

Sometimes, however, avoiding a space or non-alphanumeric character isn’t possible and for those situations, you should wrap your variable name in the VAR command. GMass intelligently deciphers first names from email addresses and puts those first names in a variable called auto-first so you can have “Dear {auto-first}” in your email. But to use that variable in conditional logic requires the use of the VAR command because of the hyphen in the variable name.

This will NOT work.

But this WILL work.

It’s easy to make a mistake when writing conditional code. When you go to send your campaign, if an individual email that’s part of the campaign encounters an error, that email recipient will be skipped and the campaign will continue sending. If you have a syntax error in your scripting, then all emails in the campaign will fail. When 10 consecutive emails error out, then the whole campaign will stop.

You are notified in all cases of any errors in your conditional scripting.

Here are the most common errors.

2. Forgetting to begin/end all code blocks with double braces

3. Forgetting the keyword “Then”

The philosophy behind this feature

In building our conditional content feature, we wrote our own compiler and mimicked an old deprecated Microsoft language called VBScript for the commands and syntax. VBScript used to be one of the easiest languages for beginning programmers to learn, and while it isn’t used widely today, its syntax and logic make it the perfect email scripting language given its ease of use.

We also analyzed the conditional content feature of a few other email platforms like Mailchimp, ActiveCampaign, and Lemlist, and found weaknesses in each, so we decided to build something better. I hope you think we succeeded in that mission.

Compatibility with other systems

Many users copy/paste their email templates from other systems into GMass, and include variables surrounded by double curly braces. To prevent “breaking” these templates, GMass will attempt to determine if the syntax inside double curly braces is truly conditional logic or is just a mail merge variable and will treat each scenario appropriately.

Conditional content is just one of the many, and the most sophisticated, ways of personalizing your email campaigns. For regular old merge tag substitution personalization, see our guide to personalization. Earlier, I mentioned how you can solve the annoying “space” issue when you don’t have someone’s first name, but we also provide a way of auto detecting first names. For our full set of personalization documentation see the personalization category page on this blog.