Understanding the timing of email campaigns

Campaign timing is a complex topic because of the different settings and types of campaigns that be sent through GMass, but generally speaking, GMass tries to send your emails out as quickly as possible while sticking to your desired schedule. When glitches occur, the timing of sending may be temporarily altered, but eventually GMass attempts to get your campaign timing back to the schedule that you intended.

GMass times the sending of your campaigns based on both your Gmail account’s limits and the max emails per day that you designate for your campaign. You can also send beyond your Gmail account’s limits by connecting your GMass account to a third-party SMTP service like SendGrid. Even when sending natively through Gmail, and not using the SMTP option, you can send large campaigns, and GMass will distribute your campaigns over consecutive days. For example, if you’re a G Suite user with an account limit of 2,000 emails/day, you can schedule a campaign to 5,000 people, and GMass will send 2,000 emails the first day, 2,000 emails the second day, and 1,000 emails on the third day.

The timing of the various options introduces certain complexities which we’ll explain here.

For clarity, let’s specify the meaning of a couple terms I’ll use throughout this article.

Sending a distributed campaign through Gmail 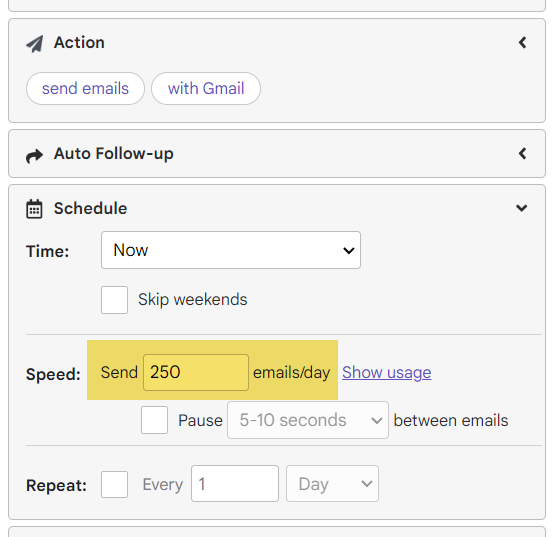 Let’s say you schedule 5,000 emails to be sent through your G Suite account for Monday at 9:00 AM.

Assuming you let GMass send the max allowed per day, GMass would send:

If, however, GMass runs into limits imposed by Gmail unexpectedly, which often does happen if you’re trying to send the max allowed per day, GMass will wait 4 hours before trying again.

For example, on Monday at 9AM, when the first batch of 2,000 sends, if Gmail starts bouncing your email with “you have reached a limit” after just 1,500 emails, and those bounces start happening at 10:30 AM on Monday, then GMass will wait for 4 hours before attempting to resume your campaign, knowing that your account still has quota left in its daily sending ability. It will try every 4 hours to get that day’s emails out. After getting that day’s emails out, the campaign will schedule itself for the next day at either 24 hours from the time the last email was sent or 24 hours from when the day’s batch started sending if you have the “Force multi-day campaign to start at same time” setting enabled.

Now let’s say your account does NOT start bouncing your emails unexpectedly, which is what we, of course, hope for. Now, if you let GMass send your account’s full limits (the full 2,000), then the next batch will send 25 hours from the campaign end time. Sticking to the above example, if 2,000 emails send Monday at 9:00 AM and ends Monday at 10:30 AM, then the next batch of 2,000 won’t send until 25 hours later, which is Tuesday at 11:30 AM.

Because we’ve found that when using up Gmail’s daily limits, it’s better to use a buffer of 25 hours than 24 to get your full limits again.

We do this in order to respect Gmail’s sending limits. If your batch of 2,000 started sending at Monday at 9:00 AM and finished at 10:30 AM, and then we started the next batch of 2,000 on Tuesday at 9:00 AM, then Gmail would calculate that you’ve sent 2,000 emails in the last 24 hours and would likely stop you from sending any more. That’s why it’s important to use the campaign end time as the basis for when to send the next batch, when you’re sending your max limits.

Want to keep the start time consistent from day to day regardless of your sending volume?

Turn on that setting

In the latter scenario, it’s based on 24 hours after the campaign end time, not the campaign start time, because if we attempted to send the next batch Tuesday at 9:00 AM, GMass would examine your campaign and find that 1,200 emails have already been sent in the last 24 hours and would therefore NOT send any emails (actually it would send just one).

In the first scenario where your campaign’s daily limit is already less than half of your account’s daily limits, we assume the user values consistency of daily timing above all else, and we also assume that the second and subsequent batches won’t violate Gmail’s limits, even though they will technically violate the campaign’s daily limits from a strictly 24-hour standpoint. Meaning, in the first example, the second batch of 200 would send even though in the last 24 hours prior to Tuesday at 9:00 AM, 200 emails have “already” been sent. The algorithm checks the prior batch’s start time, and if it’s approximately 24 hours before the current batch’s start time, and the <= 50% rules applies, then GMass assumes that 0 emails have been sent for the campaign in the last 24 hours, which is what allows the full 200 emails to be sent “now”.

This mechanism also protects you from sending out more emails than desired if the campaign errors out due to a temporary Gmail API issue and is retried an hour later, or if you, the user, manually adjusts the campaign send time. For example, let’s say you have a big campaign set to send 200 emails/day at 9:00 AM daily. For the first 3 days, a batch of 200 emails will be sent daily starting at 9:00 AM. On day 3, after that day’s batch has sent, you adjust the time of the campaign to send next at 6:00 PM on that day. At 6:00 PM, no emails will be sent, because GMass will calculate that 200 emails have already been sent in the prior 24 hours for the campaign and that the prior batch’s start time wasn’t 24 hours ago. At 6:00 PM on the following day, however, a full batch of 200 emails will be sent.

For example, let’s say your daily recurring campaign is connected to a spreadsheet called “My Contacts”. Your G Suite account allows 2,000 emails/day, and every day, no more than 100 rows are added to the spreadsheet.

The “Force multi-day campaigns to start at same time” setting 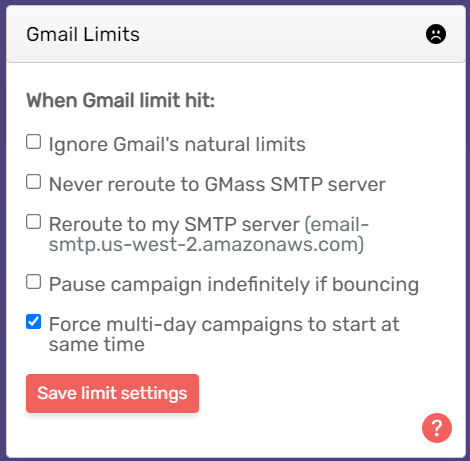 Here’s a direct link to this setting.

When an unexpected event occurs during sending

When such an event happens, your campaign will eventually continue sending and pick right back up where it left off. This, however, may break the day’s sending up into two batches instead of one. For example, if you have a distributed campaign that sends 50 emails/day every day at 9:00 AM, and on the second day, after sending 20 emails, there’s a glitch at 9:10 AM, the campaign might automatically continue sending starting 30 minutes later at 9:40 AM. Let’s say that the remaining 30 emails for the day are then sent and the campaign finishes at 10:05 AM. Even though this batch started at 9:40 AM, the campaign will intelligently schedule itself for the next day based on your intended schedule, so it will then schedule itself to send at 9:00 AM the next day. This will only happen if your campaign meets the “under 50% rule” or has the “Force next batch to send at start time” setting ON, as described above. If your campaign’s daily limit is set to more than 50% of your account’s allowance and doesn’t have the “Force batch…” setting ON, then the campaign’s next send time would be the next day at 10:05 AM.

Here are the rules:

All these rules can be confusing. But we’ve implemented the logic in a way that we think makes the most sense, doesn’t break Gmail’s rules while still getting your emails out as quickly as possible.