But this wasn’t just Elon Musk making empty promises, like when he said he’d spend money to cure world hunger. No, this time he decided to do something more meaningful with his wealth and actually purchase Twitter.

Twitter’s board of directors, however, would require some serious convincing.

And it turns out Elon Musk sent each member of Twitter’s board a series of cold emails encouraging them to accept his offer and sell him the company.

How do we know? Because like most pros sending cold emails these days, he used GMass.

Now that the Twitter board has agreed to sell to Elon, he was so grateful to GMass he shared his entire cold email series with us, and told us we could share it as well.

Here, exclusively, is the cold email series Elon Musk sent to Twitter’s board of directors to convince them to sell the company to him.

The first email: The proposal 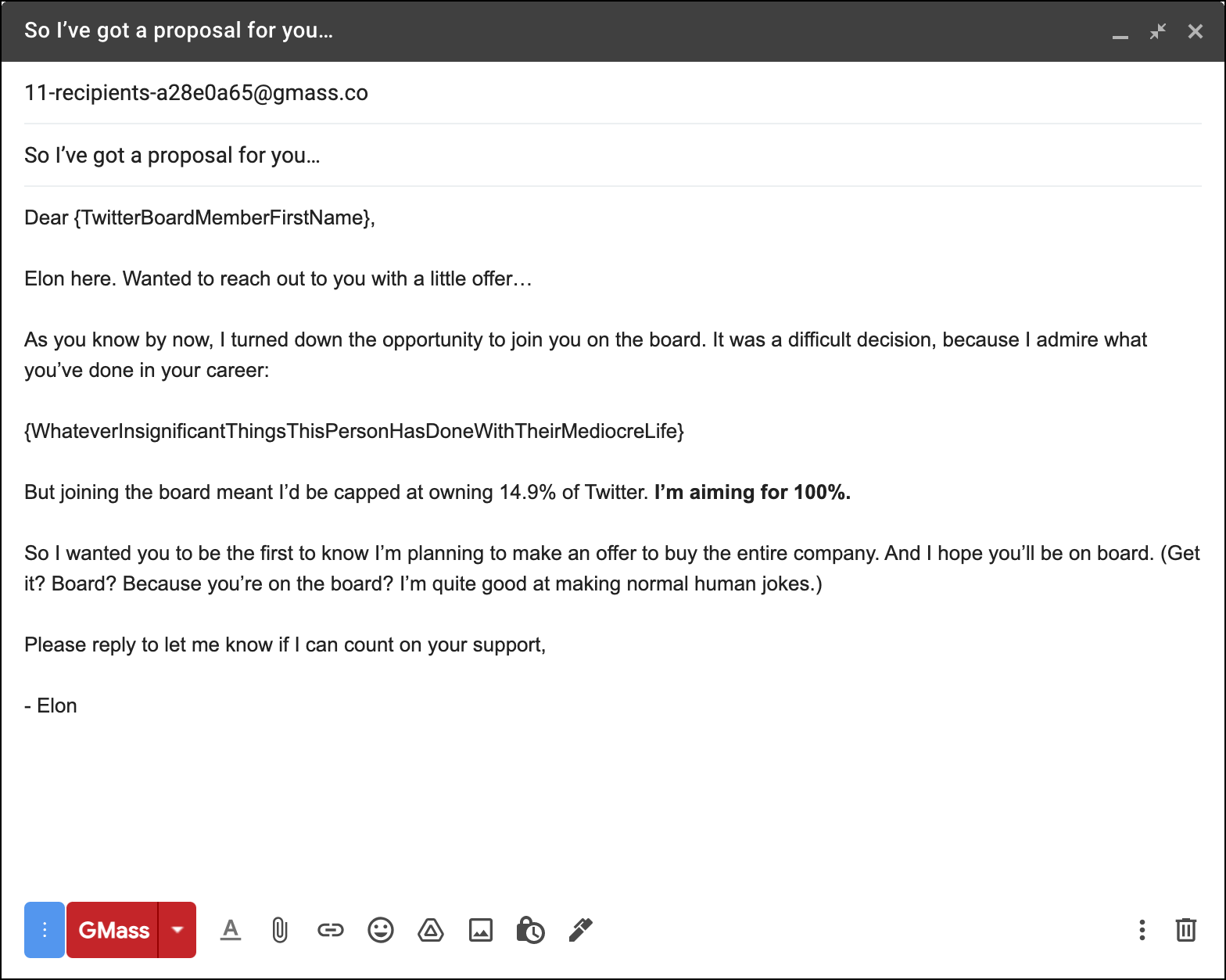 So I’ve got a proposal for you…

Elon here. Wanted to reach out to you with a little offer…

As you know by now, I turned down the opportunity to join you on the board. It was a difficult decision, because I admire what you’ve done in your career:

So I wanted you to be the first to know I’m planning to make an offer to buy the entire company. And I hope you’ll be on board. (Get it? Board? Because you’re on the board? I’m quite good at making normal human jokes.)

Please reply to let me know if I can count on your support,

We like his cold email subject line a lot: It piques curiosity and most likely drove a strong open rate.

His use of personalization is also good. He clearly researched each person on his list; then he used GMass’s feature to personalize entire paragraphs sharing what he learned about their accomplishments. (Although it’s a good thing his recipients won’t see the name of the Gmail mail merge field name he used.)

Elon makes use of humor here, or at least his definition of humor. Humor can be quite powerful in a cold email, as it creates a feeling of familiarity, warms up a recipient, and can motivate them to respond when they otherwise might not.

Finally, Elon uses a single call-to-action here, asking for a reply — it’s clear what his desired outcome is from this email. If he gets a reply, the auto follow-up sequence will stop going to this board member; if he doesn’t get the reply, they’ll get the next message in the series.

The second email: A follow-up with a greater sense of urgency 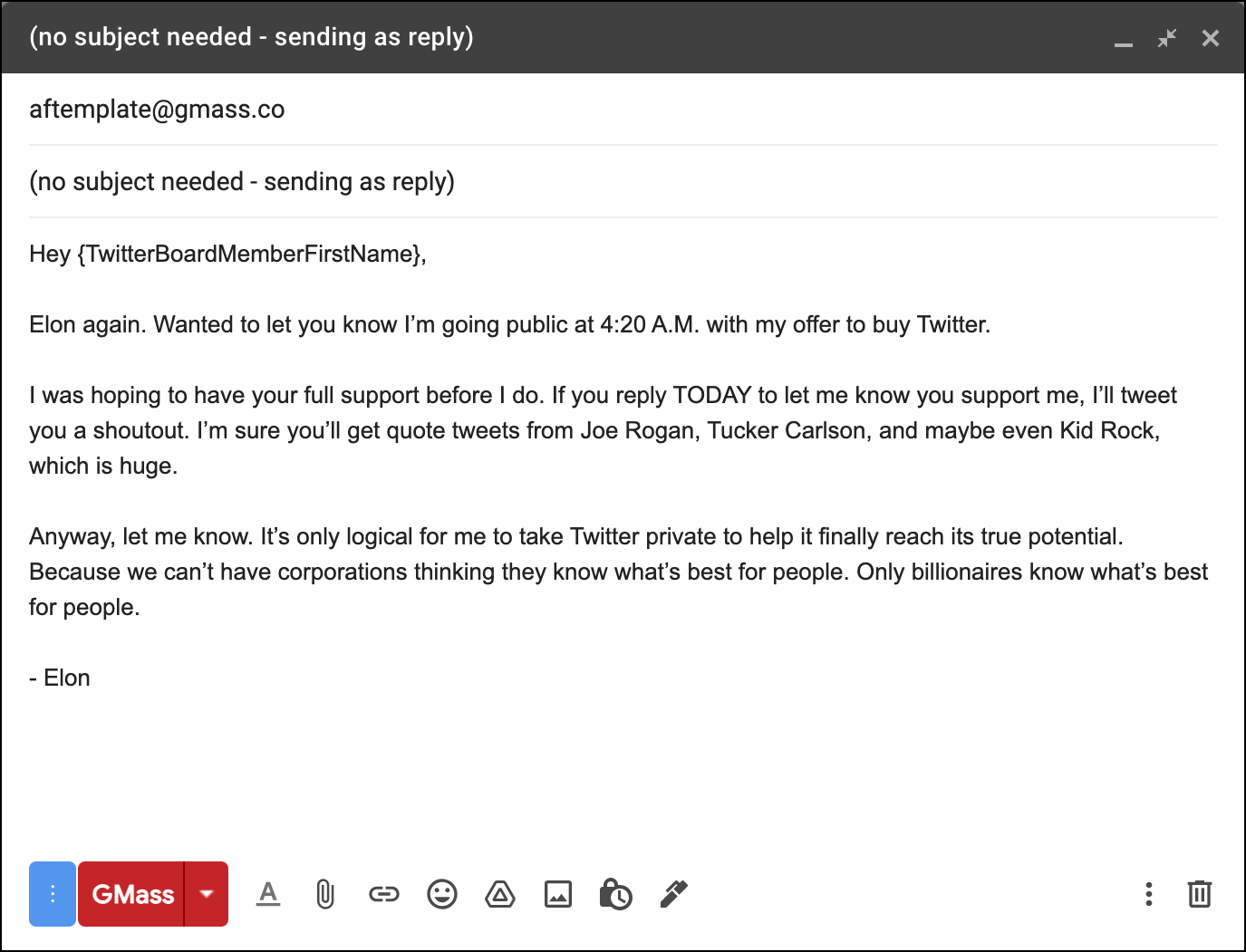 (none, sent as a reply to the previous message)

Elon again. Wanted to let you know I’m going public at 4:20 A.M. with my offer to buy Twitter.

I was hoping to have your full support before I do. If you reply TODAY to let me know you support me, I’ll tweet you a shoutout. I’m sure you’ll get quote tweets from Joe Rogan, Tucker Carlson, and maybe even Kid Rock, which is huge.

We like that Elon sent this as a reply to the previous email, rather than starting a new thread with a new subject line. Sending follow-ups as replies — super simple to do with GMass — makes cold emails look more like personal one-on-one emails.

Elon also creates a greater sense of urgency with this email, sweetening his request with an exciting offer — that comes with a ticking clock. (A Kid Rock retweet!?!? That opportunity would make anyone say bawitdaba da bang da bang something something diggy something something and up down the boogie.)

All in all, this is another convincing cold email and a strong automated follow-up.

Email #3 – Sent 4/15/22, after the Twitter board announced its poison pill strategy to thwart Elon’s purchase 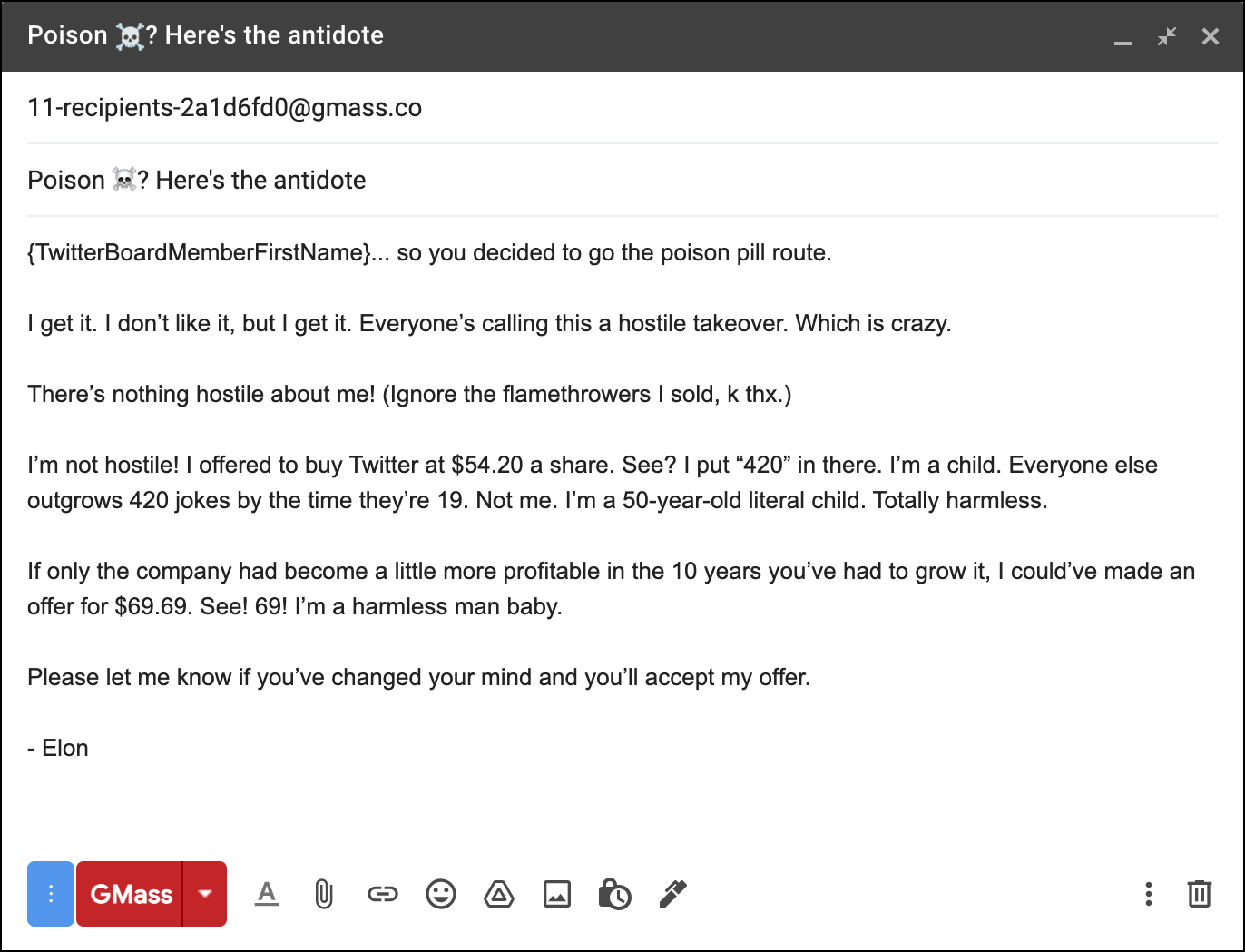 {TwitterBoardMemberFirstName}… so you decided to go the poison pill route.

I get it. I don’t like it, but I get it. Everyone’s calling this a hostile takeover. Which is crazy.

There’s nothing hostile about me! (Ignore the flamethrowers I sold, k thx.)

Please let me know if you’ve changed your mind and you’ll accept my offer.

Here in his third email, Elon tried to put the board members’ minds at ease over their concerns.

The third email in a cold email series can be a good time for that: Anticipating a prospect’s key concerns and proactively explaining why their hesitation is unfounded.

This email uses a new subject line, meaning Elon didn’t send it as a reply to the prior emails. However, he did use GMass’s “force prior message” feature, which still put his previous messaging history into the email as if it were a reply. That, again, closely simulates a one-on-one email and is an effective cold email technique.

The fourth email: Pushing hard for the close 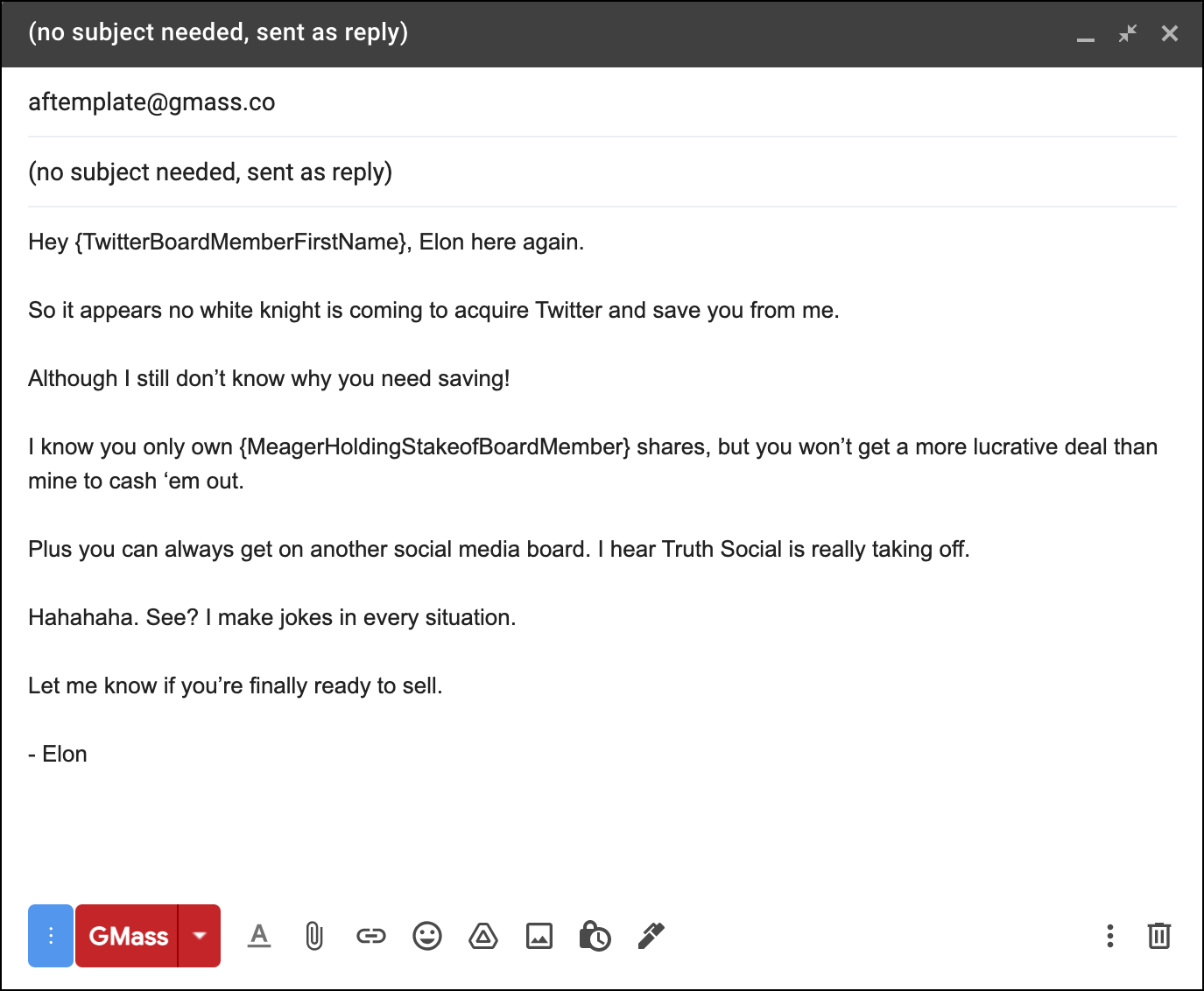 (none, sent as a reply to the previous message)

So it appears no white knight is coming to acquire Twitter and save you from me.

Although I still don’t know why you need saving!

I know you only own {MeagerHoldingStakeofBoardMember} shares, but you won’t get a more lucrative deal than mine to cash ‘em out.

Plus you can always get on another social media board. I hear Truth Social is really taking off.

Hahahaha. See? I make jokes in every situation.

Let me know if you’re finally ready to sell.

Elon is pushing even harder for a reply in this email. His cold email sequence is wrapping up soon, and he’s ready to close the deal.

So here, he demonstrates two crucial elements of any successful cold email. One, he lays out how he’s providing a unique service they can’t get anywhere else. And two, he spells out how it will personally benefit the recipient financially.

If you can use a cold email to show you’re the only one who can provide a service with clear, tangible, enticing benefits, you should see a good amount of traction.

The fifth email: The last shot 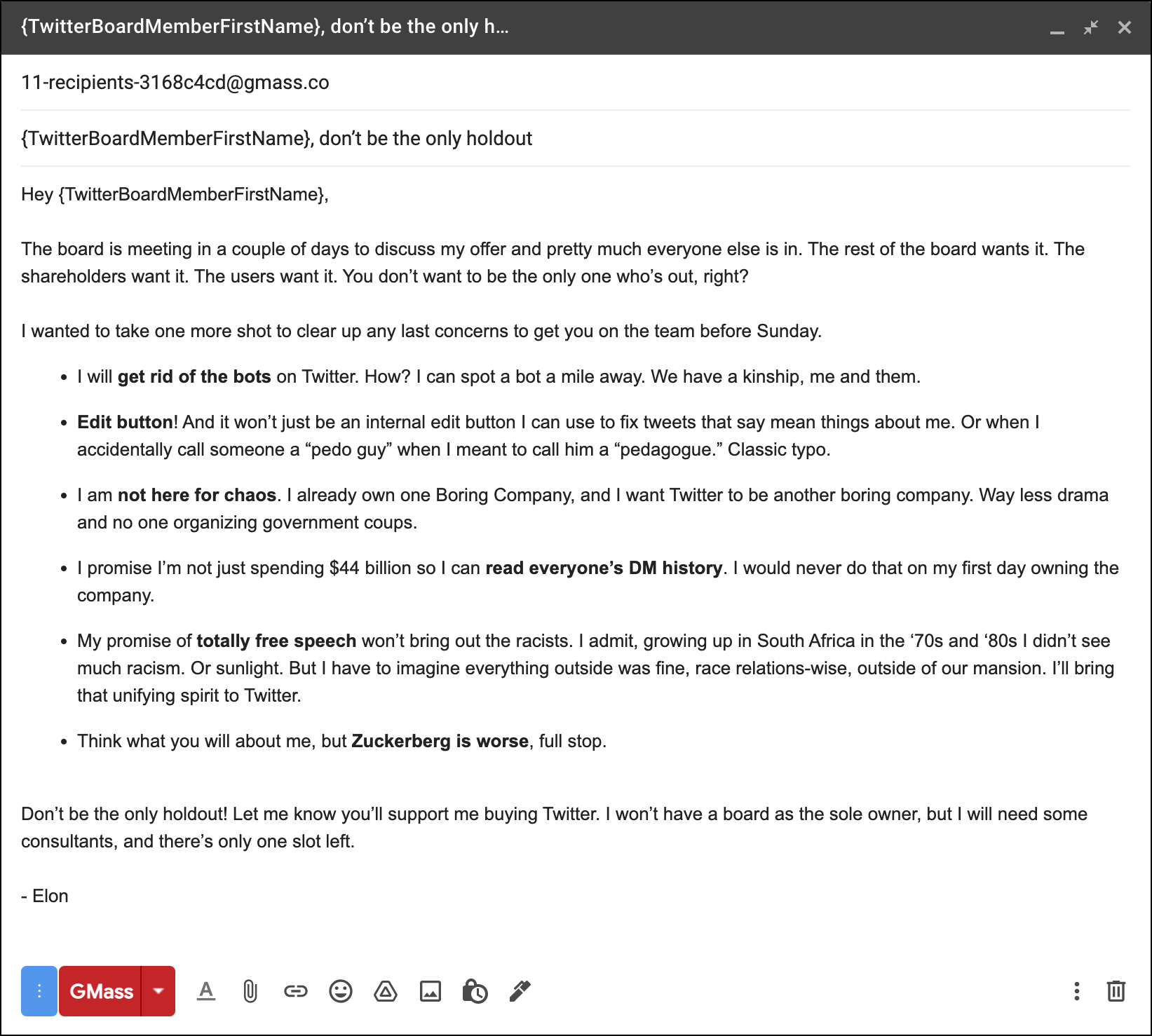 {TwitterBoardMemberFirstName}, don’t be the only holdout

The board is meeting in a couple of days to discuss my offer and pretty much everyone else is in. The rest of the board wants it. The shareholders want it. The users want it. You don’t want to be the only one who’s out, right?

I wanted to take one more shot to clear up any last concerns to get you on the team before Sunday.

Don’t be the only holdout! Let me know you’ll support me buying Twitter. I won’t have a board as the sole owner, but I will need some consultants, and there’s only one slot left.

Throughout the email, he uses top cold email copywriting techniques like FOMO and scarcity to entice the board members to support him. There’s social proof that supporting him is the popular decision — “pretty much everyone else on the board is in.”

And at the end of the email, he dangles the scarce, lucrative consulting spot. It’s the last card he has to play and is his strongest. Plus the scarcity of the deal is a clever way to get a cold email recipient to act immediately.

In the middle, he uses a bulleted list to counter points of resistance his prospect might have. Bulleted lists are easily consumable and it’s good to employ them when you need to convey lots of information in a longer-than-average cold email.

And we know this email series worked, because the board unanimously agreed to sell to Elon at their meeting.

Want to send your own amazing cold email series to complete a hostile takeover? (Or maybe to do something else?)

I’m not sure how many of you reading this are in a position to pull off $44 billion hostile takeovers (if you are, we would be willing to have you hostilely take over GMass for like 1/40th of that amount, give us a shout).

But you probably do have some reason to send cold emails or mass emails. Whether it’s to find new clients, make sales, or even just invite everyone in the PTA to an end-of-the-year fundraiser BBQ, you could use a great email outreach platform.

Like Elon Musk, you’ll find what you need with GMass.

It’s a cold email and mass email platform that lives right inside Gmail — you won’t have to learn a new system, because using GMass is just like sending your regular email.

You can create a personalized mail merge from a Google Sheet. Send automated follow-up sequences like Elon did with personalization techniques that make each email look like it was sent individually — from sending as replies to personalized images and attachments.

GMass has a huge suite of deliverability tools to help you make sure your emails wind up in the inbox, not the spam folder. And you can even use it to break Gmail’s daily sending limits to send virtually unlimited emails.

To get started for free, just download the GMass extension from the Chrome web store.

You’ll be up and running — 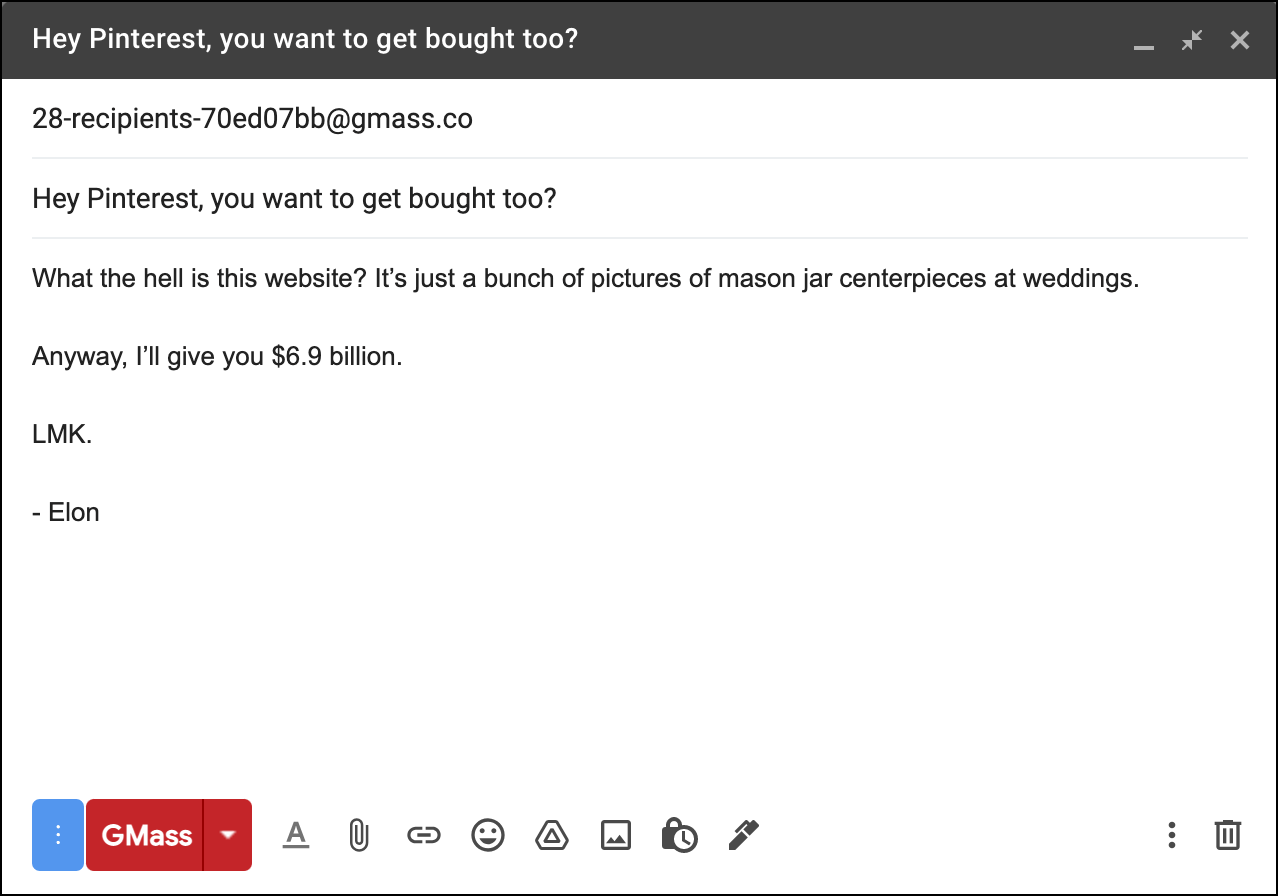 This article is satire.