When you click the button, you’ll get a popup where you can choose your past campaign, and then the behavioral segment to which you want to send a follow up campaign. If your original campaign was based on a Google Docs spreadsheet, then GMass will connect to the same spreadsheet to allow you to personalize the follow-up with the same data. 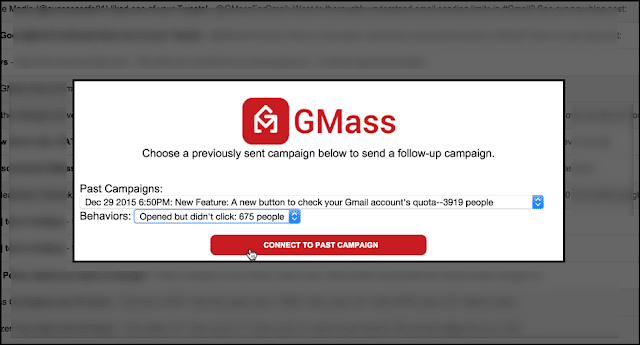 You can also send follow-up campaigns based on who replied or who didn’t reply to a previous campaign. GMass’s reply management feature organizes replies, bounces, and other types of responses into different Gmail Labels after you send an email marketing campaign. Since that feature gives us the ability to tell who replied and who didn’t reply, we have now been able to enhance the follow-up campaigns feature to allow you to also follow up based on who replied and who didn’t.

Just click the follow-up campaigns button next to the Search bar, choose a past campaign, and choose from one of the new behaviors listed:

Note: If you’re a power GMass user, it’s essential that you follow us on Twitter. This announcement is for follow up campaigns that you have to send manually, but what I’m working on next will truly blow you away — automated follow-up drip campaigns, where you upload a lead list, and then we send the list a personalized message every few days until you get a response. There are lots of tools to send drip campaigns already, but none with a tight Gmail integration. Stay tuned for that!